The other day I was up for some Chinese food but I didn't feel like ordering the greasy, starchy takeout from around the corner so I decided to make some myself. I had some extra brisket in the freezer that I wanted to use up so I went for a pressure cooked version of Chinese Peppered Beef.

The process is pretty simple. Take some brisket (a chuck roast would also work) and sear it on both sides. Lightly caramelize some carrots, red peppers, and onion in the base of the pressure cooker then add the brisket back to it.

Add the ingredients for the sauce, in this case it was sesame oil, minced ginger, Worcester sauce, rice vinegar, soy sauce, chicken stock and sriracha. Give it a good stir then seal the pressure cooker, bring it to pressure, and cook for about 60 minutes.

Once it was cooked I let the pressure release naturally then I removed the brisket from the pressure cooker and shredded it. I like to leave most of the fat on the brisket because it adds so much flavor, but you can remove it if you prefer.

For the sauce, I added some xanthan gum and Ultra-Sperse to the vegetables and juices in the pressure cooker and pureed it all together until it was smooth. If you prefer, you can always blend in flour or corn starch and it will work fine as well. Just make sure you bring the mixture to a boil after adding the starch, something you don't have to worry about with the xanthan gum and Ultra-Sperse.

To serve the meat, I lightly browned some onions, red and yellow peppers, and mushrooms and tossed them with the shredded beef and some of the sauce. I added a healthy amount of freshly ground black pepper and served it alongside a simple cucumber salad.

I served it with a super simple cucumber salad to add some crunch and brightness to the dish.

All-in-all it's a pretty easy meal to put together and the resulting taste is much better than the inexpensive Chinese take out food you're probably used to!

If you like this recipe you can get more than 85 other inspiring recipes to get you on your way to sous vide success. It's all in my best selling book Modernist Cooking Made Easy: Sous Vide - Get Your Copy Today!

If you would like more information about the modernist techniques, ingredients, and equipment used in the pressure cooked brisket peppered beef recipe you can check out the following. 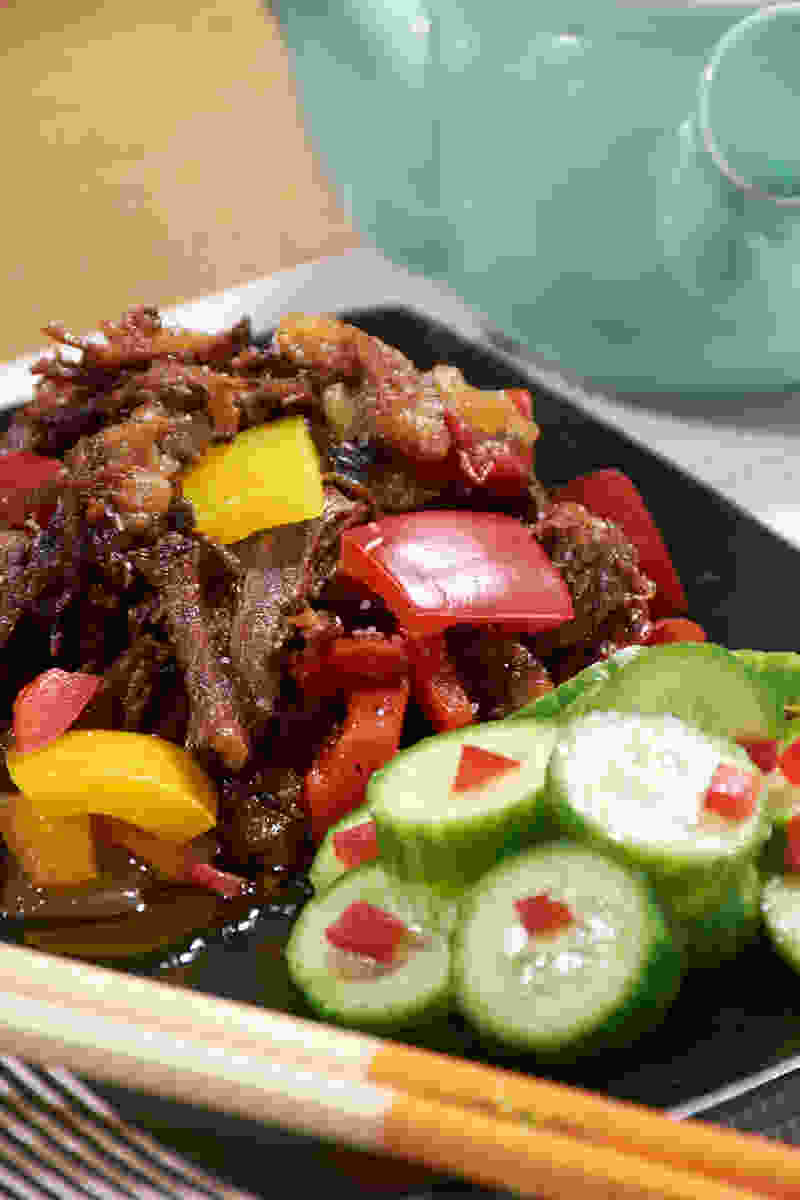 For the Pressure Cooked Brisket

At least 90 minutes before serving

Salt and pepper the brisket. 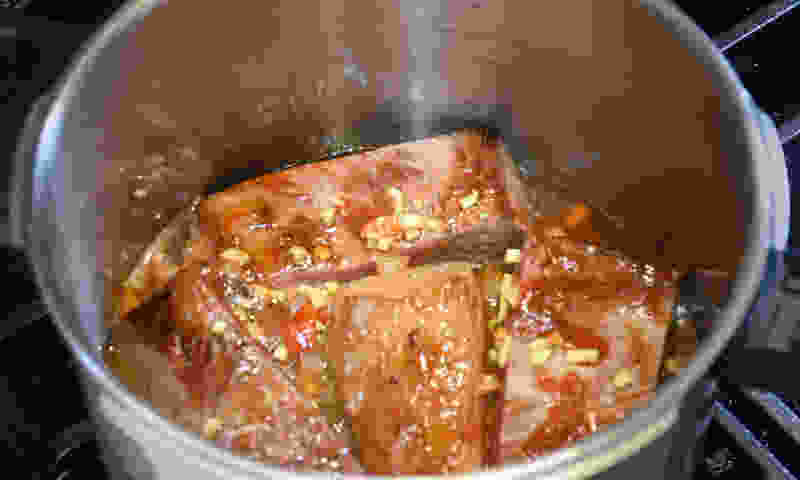 Seal the pressure cooker, bring to full pressure (15 psi), and cook for 60 minutes.

While the brisket is cooking, you can make the cucumber salad and mixed vegetables. 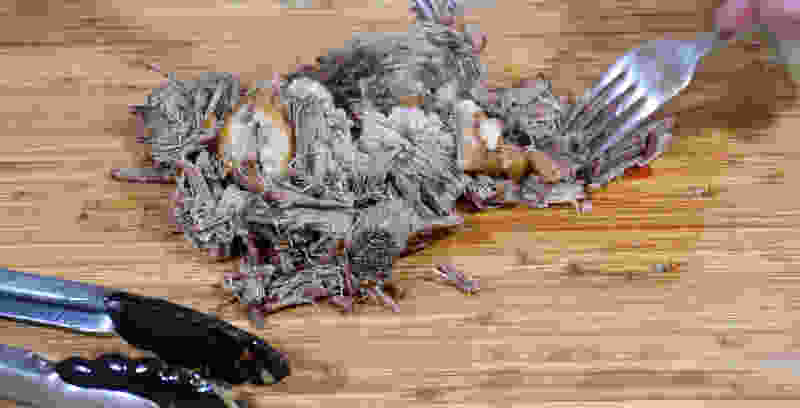 For the Mixed Vegetables

At least 30 minutes before serving

Place some oil in a pan and heat over medium-high heat. Add the onion then salt and pepper it. Cook until it just starts to brown, about 10 to 15 minutes. Remove the onion from the heat and set aside.

Repeat the above process for the peppers, then the mushrooms.

This process can be done ahead of time and then reheated once the meat is done.

For the Cucumber Salad

At least 20 minutes before serving

Combine the cucumbers with the other ingredients and mix well.

This can be done ahead of time and stored on the counter for an hour or two, or in the refrigerator for about 5 hours.

For the Peppered Beef Sauce

At least 10 minutes before serving

Take 500 grams of liquid and vegetables from the pressure cooker and combine them with the xanthan gum and Ultra-Sperse. Blend well using an immersion blender or standing blender. You can add more xanthan gum and/or Ultra-Sperse to thicken the sauce as much as you want. For a more traditional sauce you can blend in corn starch or flour and bring it to a boil. 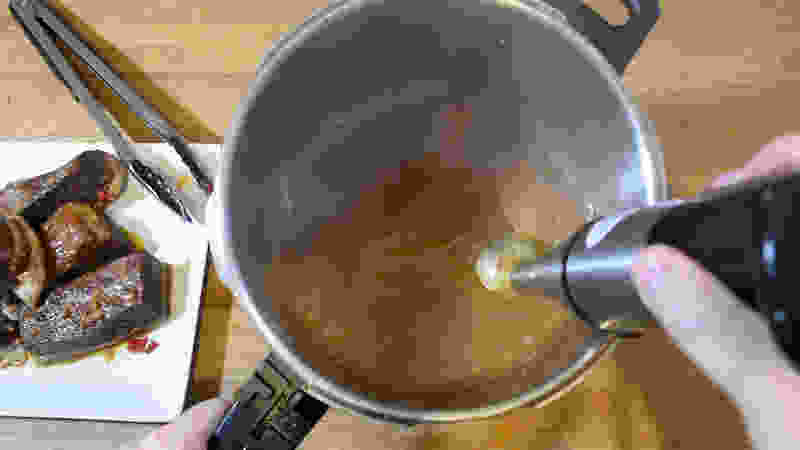 Combine the shredded beef with the mixed vegetables and a spoonful of the peppered beef sauce. If they have cooled off you can reheat them in a pan. 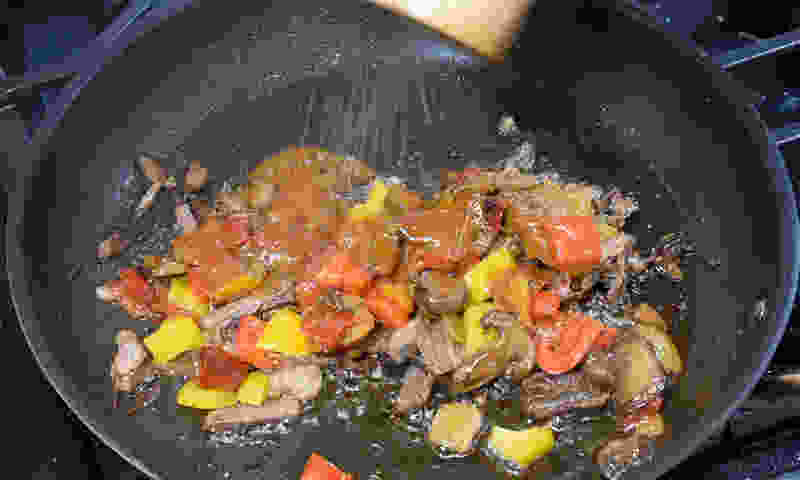 Add a good helping of freshly ground black pepper. Place the meat and vegetables on a plate next to the cucumber salad then serve. 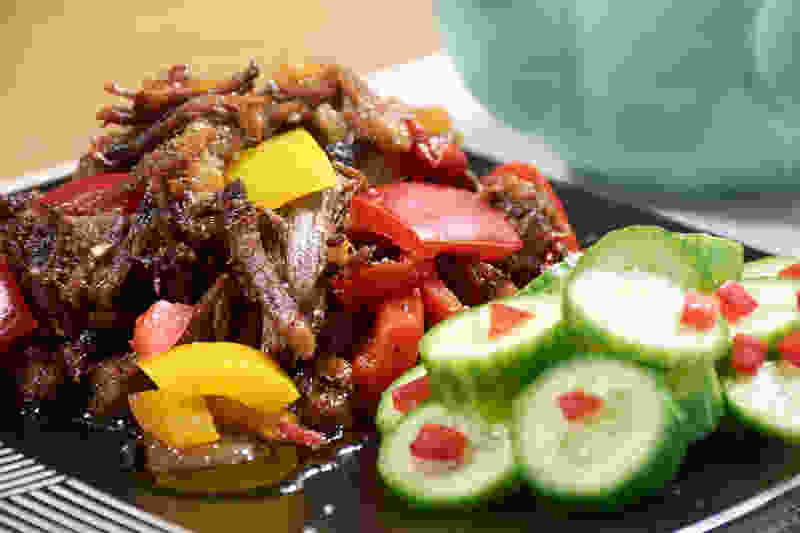 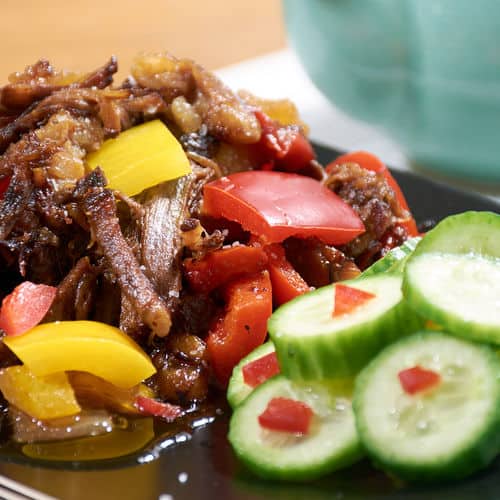