This is part of my series of recaps from the Brooklyn Taste Talks panels I attended.

I really love good BBQ and I think this panel turned out to be a favorite. They had a great mix of viewpoints and while they all were coming from very different places they completely respected the opinions of the others. It made for a very dynamic panel as they addressed some heavy questions.

I've only been to a handful of BBQ places in New York (and unfortunately I couldn't get into Blue Smoke last time I tried...sigh) but I'm going to definitely make a concerted effort to check out all three restaurants of the panelists. There's something to be said for eating food prepared by people who are passionate about it and draw from their life experiences when deciding what to put on your plate.

Jean-Paul grew up in Thibodaux, Louisiana. After being classic trained in culinary school and several stints at upscale French and Italian restaurants he took over the kitchen at Blue Smoke and starting cooking the food he grew up with.

Sarah Simmons was also born in the South, I believe she referred to it as "from the Carolinas". After working at several restaurants she opened up her own Southern-inspired restaurant, Birds and Bubbles, where she tries to encapsulate the real Southern dining experience.

Daniel Delany was the odd-person-out on the panel, growing up in New Jersey ("Was it at least Southern Jersey?" "Oh hell no!"). He opened up Briskettown in the city where he tries to serve the best brisket possible through lots of experimentation. I also felt a little bad for Daniel since he ended up answering every question first, putting him on the spot while the other chefs could at least think about their answers!

The moderator was Sonia Chopra from Eater and she did a great job asking insightful questions to the panelists.

Note: I didn't bring a recorder with me, so all quotes are either what I jotted down or what I remembered but the words aren't verbatim. I tried to do my best to capture the spirit of what they were saying but if they come across negative in any way it's because I screwed up the quote, not because of what they said originally.

How Did You Get Into Cooking Southern Food?

Hearing about what southern food means to these chefs on the @SanPellegrino stage pic.twitter.com/WDVuS3uFWn

Sarah discussed that she was at the point where she no longer felt much connection to the type of food she was cooking (I believe it was upscale French or Italian) so she decided to go back to her roots and cook what she ate growing up. She also had one of the quotes of the day with "I didn't want to be the fried chicken girl...of course, now my most popular menu item is the fried chicken".

After several stints at very popular restaurants Jean-Paul was also ready to get back to cooking what he grew up with and took over the head position at Blue Smoke. In the other restaurants he missed the connection to his heritage that BBQ gave him.

Daniel he got into Southern cooking during a culinary road trip when he fell in love with the flavors and decided to bring them to New York.

What is Southern Food to You?

Sarah discussed trying to move the Southern attitude and culture into her restaurant so patrons would feel like they were experiencing a good Southern meal. All of her dishes are ones from her past (or her staff's past) that she feels a connection to.

Jean-Paul talked about how "Southern Food" is such a broad concept and means so much to so many different people. In his mind it's staying true to the flavors and methods he was brought up cooking while focusing on the "feeling" of the food through trying to convey the Southern hospitality to the diners.

He also commented that in his mind, "soul food" can be any food that stirs your soul. Whether it's pizza, gumbo, or brisket if it affects you emotionally then it's "soul food". He also shared the fact that he had to start putting his bio and hometown in Louisiana on the menu because people saw "Chef Jean-Paul Bourgeois" on the menu and would write in complaining that there's no way a French guy can cook BBQ.

Daniel viewed Southern cooking much more as a flavor-base than the more expansive "Southern Cooking" feeling the other two had. He talked about trying to recreate the flavors in his restaurant and cherry picking specific popular memes from Southern restaurants (no BBQ sauce, making people wait in line). After a few years in he's totally revamped how they operated to get more inline with his own brand of New York-style Southern instead of just aping other establishments. He feels like it's really helped Briskettown.

Soul food is any food that stirs your soul: Jean-Paul Bourgeois @BlueSmokeNYC #tastetalks

How Do You Reconcile Your Cuisine with Its Past?

With a history rooted in the African slave trade and plantations, "Southern" food is a very loaded term. I thought this was a great discussion about a really tough subject.

Susan talked about how she tries to confront the history of the cuisine up front and addresses it in her employee handbook. While she can't go back and change the past of America, she can encourage her employees to be kind to all people and treat people equally. She also has a largely African American kitchen staff, including her chef de cuisine, who influence both the recipes and feel of the restaurant.

She also shared a story about one of the first reviewers of her restaurant who used the fact that Susan served Southern cuisine, as a platform to discuss racism and slavery instead of the food itself. It really hurt her and angered her because she does try to be so up front about the past of her cuisine.

Susan also talked about how at Birds & Bubbles they often do toasts with shots of champagne at dinner, and the day South Carolina took down the confederate flag they felt such relief they were doing toasts every 30 minutes in celebration.

Jean-Paul stressed that they really try to focus on the present and be inclusive to all people. That your race, gender, or sexual preference shouldn't matter. 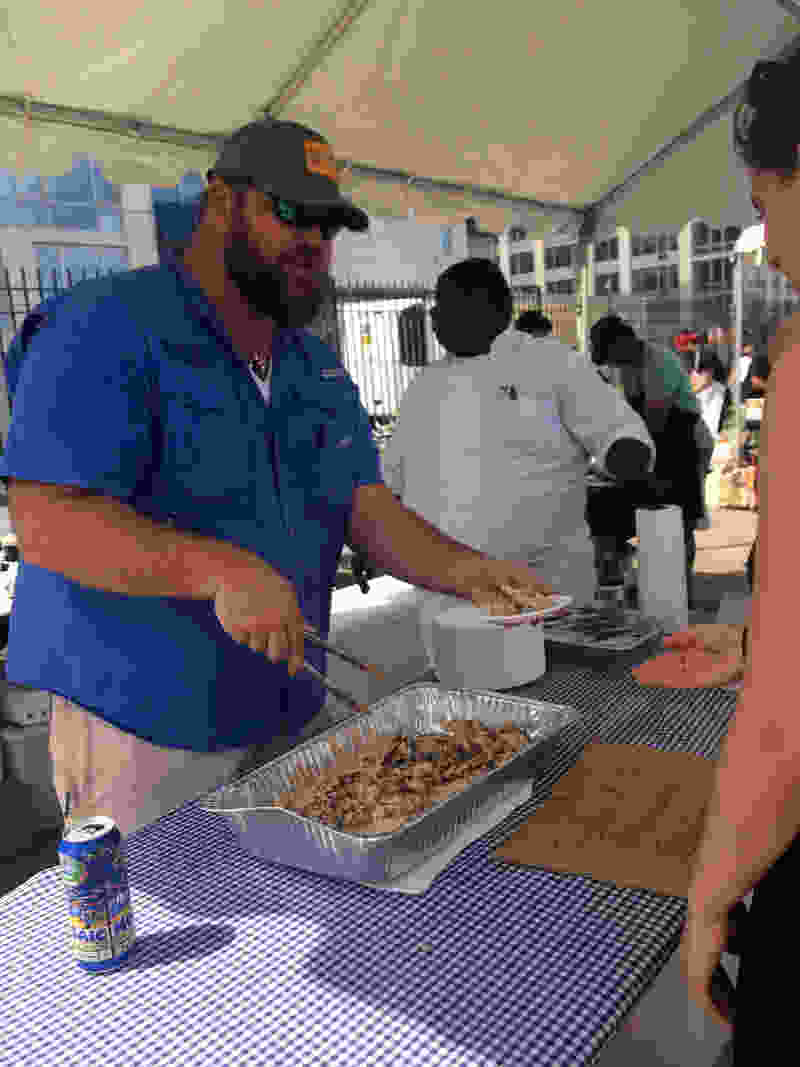 When creating the concept for Briskettown, Daniel put together a mix-tape playlist of how he wanted the restaurant to feel. Now when he is trying to make big decisions about the restaurant he goes back to that and sees if the idea fits with the music. As he said "everything I do that I don't completely believe in has turned out like shit".

When talking about using Southern ingredients Jean-Paul and Sarah discovered they both import some of the same things, and both believed they were probably the only restaurant in New York that used some of those ingredients.

I got to try Jean Paul's Alabama white wings at the BBQ the next day and they were fantastic!

You can read all my Brooklyn Taste Talk Recaps or let me know what you think in the comments below.

All tags for this article: Event Coverage