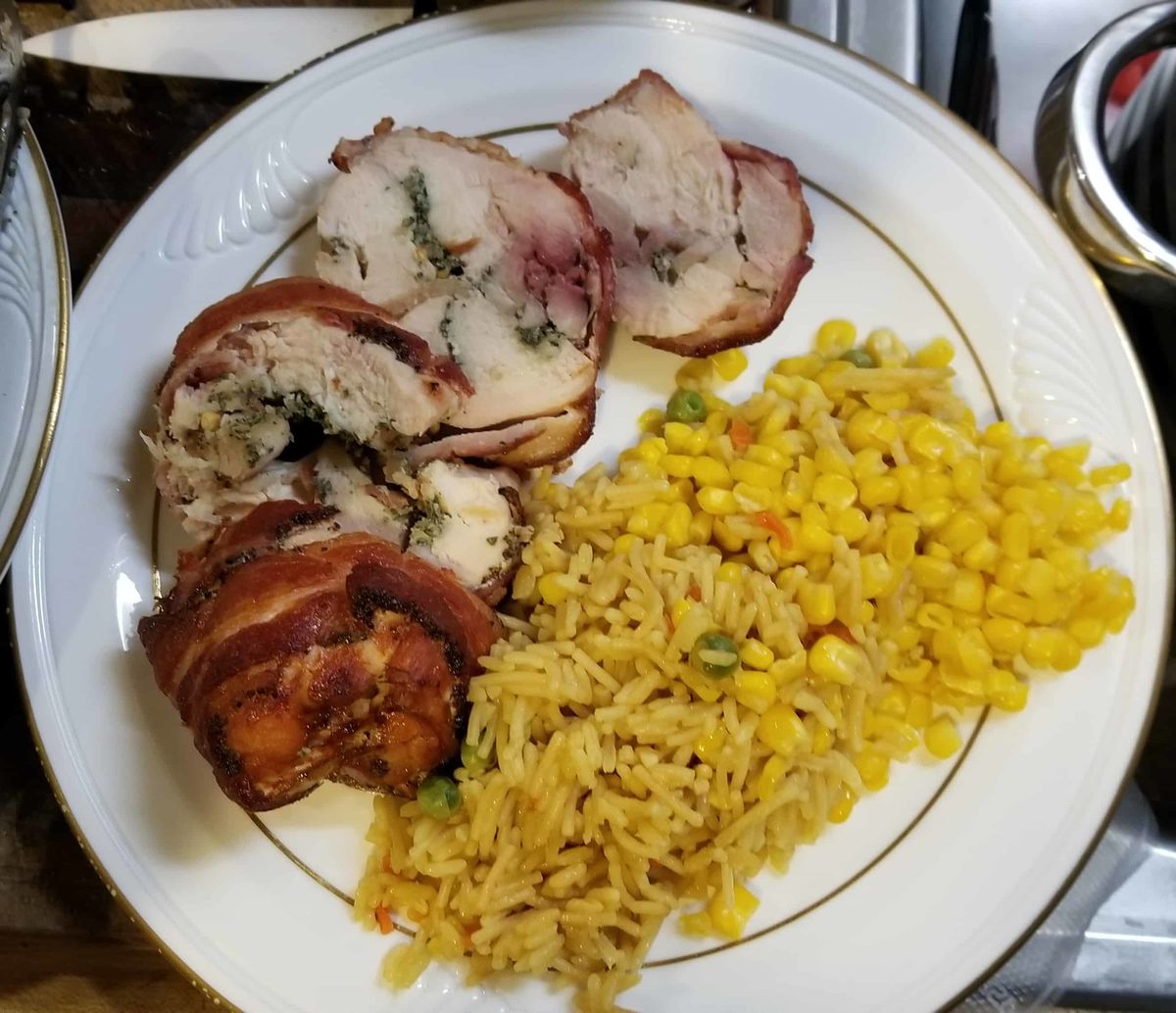 After making a Turkey Porchetta at Thanksgiving, I decided to adapt the basic Turkey Porchetta to be more of a year round dish, and take it to the next level. So I created Chicken Porchetta, aka, Chicketta.

*NOTE: This recipe was submitted by the author as part of an online recipe contest. It has not been tested by ISVA.

For the Spice Rub

Lay out strips of bacon from left to right on the work surface. The bacon should meet up edge to edge to form one large square of bacon. Optionally, if you want a fancier presentation, you may decide to create a weave from the bacon. I found the strips laid out side by side was sufficient.

Lay one breast half on top of the bacon with the thick straight side to the left, and butterfly the thick end by cutting through it horizontally with a boning knife, leaving the last 1/2 inch intact, then folding out the flap to the right. Repeat with the other breast(s). The breasts should form a single contiguous 1/2 inch of chicken on top of the bacon.

Make a series of diagonal parallel slashes at 1-inch intervals in the chicken breast cutting about halfway into the meat. Repeat with a second series of slashes perpendicular to the first.

Rub the spice/herb mixture into the meat, making sure to get it into all of the cuts.

Carefully roll the chicken from left to right into a tight cylinder, using the bacon to completely enclose it. Tie the roll tightly with butcher's twine at 1-inch intervals (along the strips of bacon), as well as once lengthwise.

After forming and tying the Chicketta, transfer to a sous vide-style vacuum-seal bag. I use Foodsaver bags with great success. Pull a vacuum and seal for cooking.  The sealed Chicketta can be stored in the fridge for up to 2 days before cooking.

Preheat the sous vide water bath to 140°F (60°C). Place the sealed Chicketta in the water bath and cook for 4 to 5 hours. Remove and run under cool running water, or transfer to an ice bath to chill for 5 minutes. Remove from bag and save any juices to make a gravy if desired.

To finish by Deep-Frying

Preheat the deep fryer to 350°F.  Carefully lower the Chicketta into the hot oil being sure not to splash the hot oil. Fry till the bacon on the outside renders to your desired degree of doneness.  The bacon inside was fully cooked before the sous-vide process as it would not fully cook and render by sous-vide inside the roll.

To Finish by Air-Frying

Preheat the air fryer to 350°F.  Place the Chicketta in the air fryer and air-fry till the bacon on the outside renders to your desired degree of doneness.  The bacon inside was fully cooked before the sous-vide process as it would not fully cook and render by sous-vide inside the roll.

Allow the Chicketta to rest 5 minutes. Carve and serve with gravy on the side.