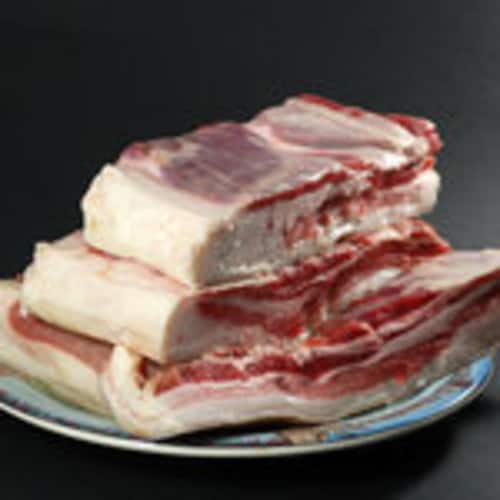 Bacon at a Glance

Bacon is one of the earliest forms of processed meat to have been made. The Chinese have been said to start salting pork bellies as early as the 15th Century. However, the bacon we know today was produced in Western Europe and England around the 16th Century as a staple food for peasants. The term bacon comes from German and French dialects. It was generally used for all types of fatty meat, but soon became associated with the processed meat product.

This cured meat is often prepared from pork belly, side and back, although other cuts may be used depending on the type of bacon. The fatty meat gives it a marbled, striped white and pink appearance seen on the long strips it is cut into. This may have the rind left on or removed. Flavor wise, it is salty with a mixture of sweetness and smokiness along with a buttery taste from the fat. Certain flavors may also be incorporated with it according to the curing ingredients added or wood used for smoking.

This popular processed meat is made by curing a slab of meat using either dry packing or brine for several days. After the curing period the meat or fresh bacon as it is known is then air dried, smoked or boiled. The processed meat can then be sliced into rashers and cooked or stored.

Although in many places bacon is served as breakfast food, there are many other uses. It can be fried, boiled, smoked, baked and used alongside other food both as a minor and major ingredient. The flavor of bacon makes it versatile and it easily compliments may other foods. Soups, stir-fried dishes, baked meat, salad and bread are just some of the things that pair well with bacon.