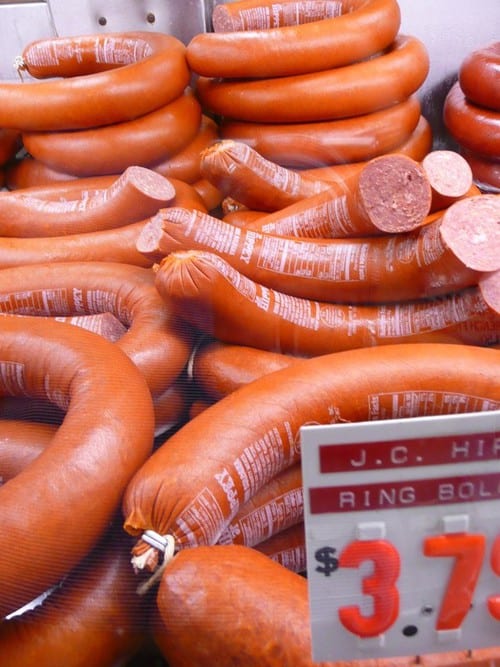 Bologna at a Glance

Taking its name from the capital city of the Emilia-Romagna region in Northern Italy, bologna comes from the Italian Mortadella sausage. Made from finely ground and mixed meat with fat that is cooked and smoked, this is a staple product in the city of Bologna dating back to the 1400's. This sausage spread throughout Europe and America through traders and immigrants, becoming known as the familiar bologna sausage eaten today.

This sausage can be classified alongside other luncheon meats. It is made in two main shapes namely, round which is cylindrical in shape with a fairly large diameter, and ring which is long bologna, tied to make a ring shape. Most bologna in the market today is finely ground to a paste showing no pieces of fat or spices in it. These usually have a pinkish flesh like color and velvety texture on the inside and a smooth, shiny, slightly darker colored outside. The heavily spiced luncheon meat carries a hearty taste of mixed meats and fat that is peppery.

As mentioned earlier, bologna is made by finely grinding all of its ingredients together to create a paste. The mixture is then placed into synthetic casings and left to set in the fridge before being smoke. The final step in making bologna is cooking it in water to create a firm and solid sausage. This luncheon meat is most commonly made from beef, pork and other by-products but it can also be made from other ingredients. Mutton, veal, chicken, turkey and venison can all be used. For vegetarian bologna, soy protein is often substituted.

The most common use of bologna is as a cold cut for sandwiches. It mixes well with various condiments and spreads. Cooking is not necessary since this is already cooked during production, but it may also be fried in oil before consumption. Aside from being used in sandwiches, it is also often used in pickling and can be eaten as a snack in itself. Bologna can also be sliced into thicker or bigger pieces and served as an appetizer or used in cooking.

Photo Credit: animalvegetable
Like What You've Read?
If so, please join the more than 19,000 people who receive my exclusive newsletter and get a FREE COPY of my printable modernist ingredient cheatsheet.
Just click on the green button below!