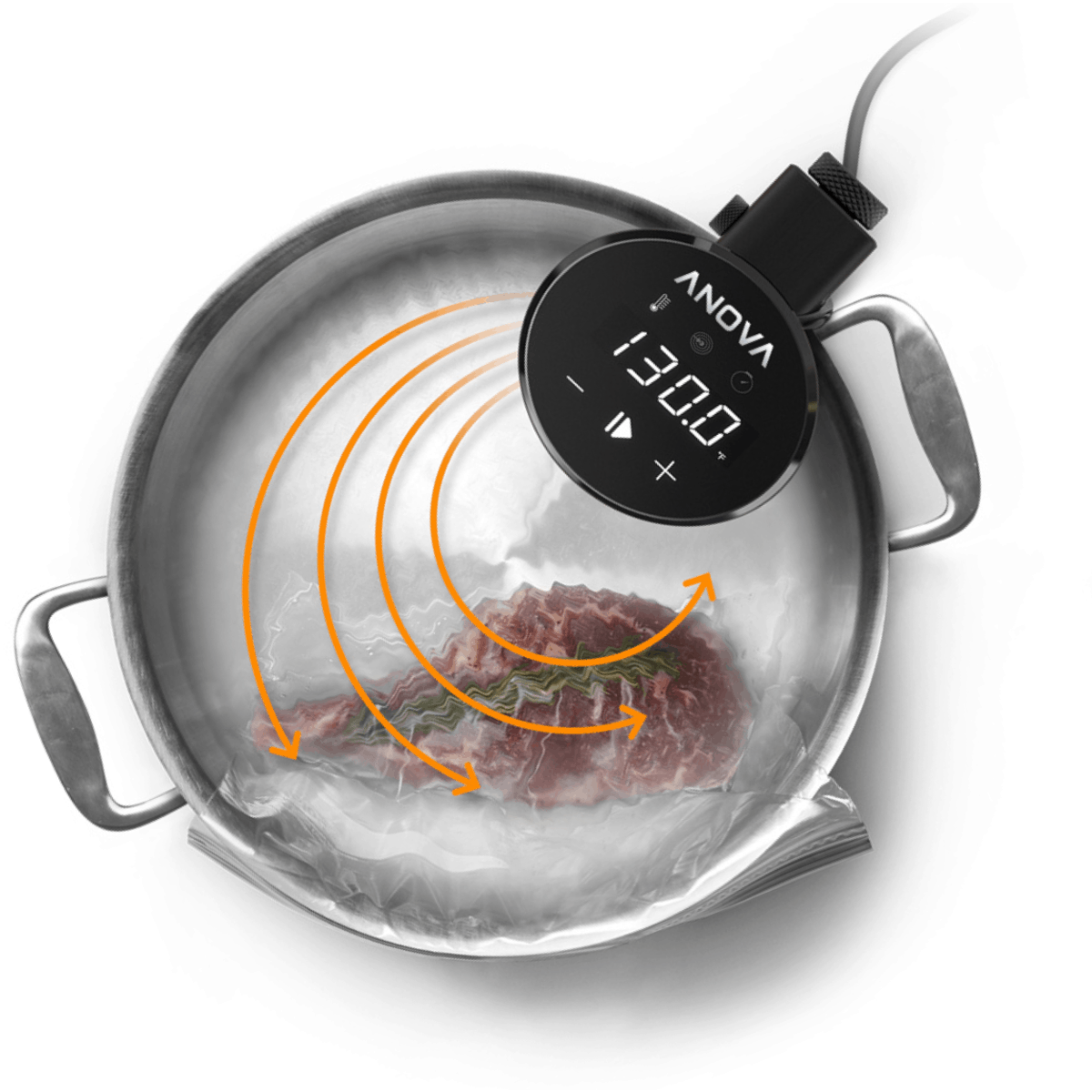 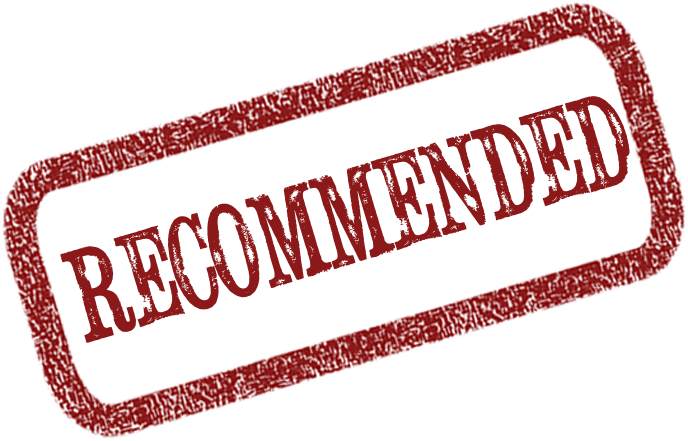 What We Like About the Anova Precision Cooker AN500

The power has been increased to 1000 W and pumps water at 8L per minute. This allows the AN500 to heat water faster (Except at the high end, see below) and improves the capability of the circulator to be used with larger water baths.

The Anova PC AN500 is splash, steam and water resistance. It has been steam tested for over 1000 hours at 90°C. It also has an IPX7 rating for complete submersion up to 1 meter deep for at least 30 minutes. In other words, if you have an accident in the kitchen, there's a good chance the circulator will survive!

Despite all of the improvements in the unit, they have been able to reduce the size to a more compact design, almost 2" (5cm) smaller than its predecessor, similar to the Anova Nano. This makes it much easier to store in a drawer or on a shelf.

For example, they have a 100 day, no questions asked, money back guarantee, if you purchase the circulator from the Anova Culinary website. Moreover, they have an industry leading two year warranty. They also have a treasure trove of sous vide recipes both online and in their app. Finally, they have half a million #anovafoodnerds worldwide in their community.

What We Don't Like About the Anova Precision Cooker AN500

The Anova AN500 does have some weaknesses that need to be mentioned. In our benchmark testing, the temperature start and rise times had us scratching our heads. The Anova AN500 Room Temp Start Time (Reach 140°F) was a respectable 26:40 (Minutes:Seconds). As you would expect, this is faster than the Anova Nano (31:50), and slower than the Anova Precision Cooker Pro (20:10).

Unfortunately, the AN500 has issues at the high end of the temperature range. The Temperature Rise Time (Raise 140° to 183°F) was 31:20, which is one of the slowest times recorded out of all the circulators tested. The Anova Nano does it in 26:20. And in hands-on testing, Jason could not get the AN500 up to 195°F to cook risotto. Given the power of the AN500, this doesn't make sense. Perhaps it's a firmware issue that can be remedied with an update?

The Anova Precision Cooker AN500 is also the loudest of the Anova family. The noise emitted by the unit is more like a high-pitched whine, than a whirring sound. This means the sound travels further and is a more annoying. The negative impact on you will vary depending on the environment in which you live and cook sous vide.

With the shortening of the circulator length, comes a negative consequence. Due to the location and spacing of the MIN and MAX lines on the shorter submersible component, the level of the water in the bath needs to be closely monitored. To get the water level over the MIN line the water bath needs to be filled nearly to the top. So, you need to be careful when you add your sous vide proteins to the bath that the water level doesn't overflow or go past the MAX indicator.

With the availability today of a large number of low-cost circulators, many with WiFi, the Anova AN500 at $200 is at the high end of the price spectrum. Consequently, for the sous vide shopper on a tight budget, this may put this circulator out of reach. But if WiFi is not required, the Anova Nano would be a great alternative purchase.

Since the apps associated with the various circulators are constantly being updated, we have made it a practice not to review the apps themselves. However, we believe it's worth noting that we were unable to sync the circulator to our smartphones. Several of the troubleshooting processes were tried, but to no avail. We are confident that with persistence and assistance from Anova you will be able to get over this hurdle, we just did not want to invest any more time.

Why We Recommend the Anova Precision Cooker AN500 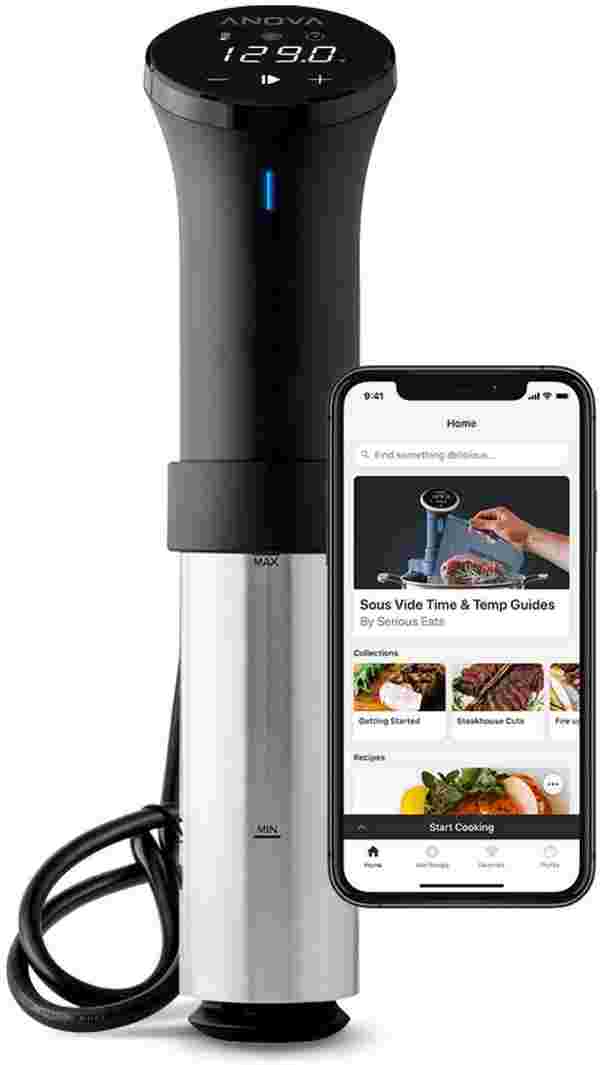 As long time users and proponents of Anova circulators, we are pleased to recommend their latest family member, the Anova Precision Cooker AN500. The AN500 has the temperature precision and stability, adjustable clamp, removable stainless steel skirt, and connectivity of its predecessor. The improvements made in power, water resistance, and size have made this new model even more appealing.

As we mentioned above, the AN500 is not without its issues. Some of these may impact some sous viders more than others. Remember, you can take advantage of the100 day, no questions asked, money back guarantee, if you purchase the circulator from the Anova Culinary website. This would allow you to test the Anova Precision Cooker AN500 in your kitchen at no risk.

We believe the Anova Precision Cooker AN500 a good match for sous viders who want the convenience of WiFi, prefer having a manual control panel on the unit, and/or occasionally use larger water baths. For those without all those requirements, the Anova Nano might be the more economical choice.

User Comments on the Anova Precision Cooker AN500

Have you used the Anova Precision Cooker AN500? Let us know what you thought of it!