A huge benefit of living in New England is getting to try all the different clam chowders around. Everyone has their own take on how to serve it. For this dish I gel the chowder, cube it, and serve it on a crunchy sourdough crouton with a smoked clam on top.

The recipe for the chowder base is very simple and tweaked to work well with this dish. It uses clam juice to impart the clam flavor without discoloring the chowder. It wouldn't be nearly as good if served as a typical chowder. If you have a favorite chowder recipe feel free to use it, just make sure you puree it well before gelling, you don't want the texture interrupted by chunks of potato or onion.

You can make the chowder base and clean the clams ahead of time but you should make the croutons and smoke the clams right before serving. If you don't want to smoke the clams you don't have to, the dish will still work fine without it. The chowder gel is very delicate so be sure to handle it carefully, especially if you are reheating it. 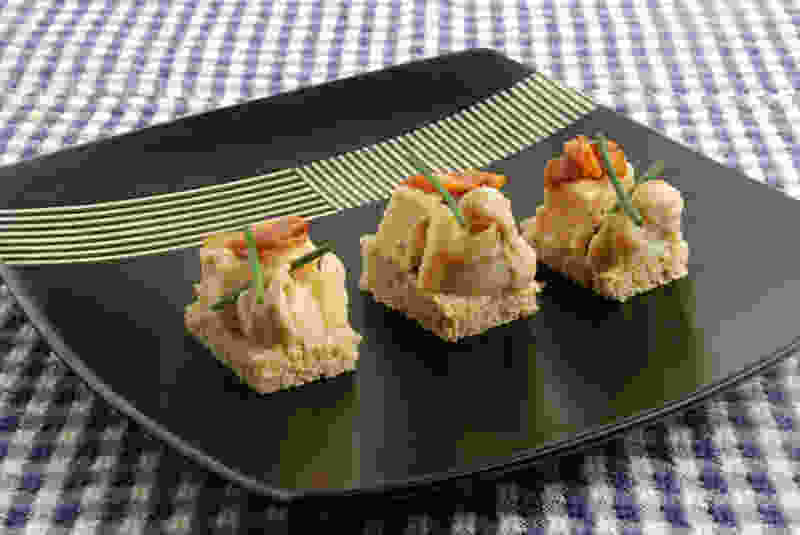 If you would like more information about the modernist techniques, ingredients, and equipment used in the clam chowder with smoked clam recipe you can check out the following.

For the Chowder Base

For the Sourdough Croutons

For the Smoked Clams

For the Chowder Base

Place the bacon in a pot over medium heat and cook until the fat is reduced and the bacon is crispy. Remove the bacon from the pot, reserving it for later, and pour out all but a tablespoon or two of fat.

Add the onion, carrots, and garlic to the pot then cook for 5 minutes until just turning translucent. Add one quarter of the bacon back into the pot and reserve the rest for a garnish. Add the whole milk, clam juice, and iota and kappa carrageenan and puree well. Bring to a boil then pour into a mold where it has a depth of 0.75" to 1" (19mm to 25mm) and let set.

For the Sourdough Croutons

For the Smoked Clams

Cook the clams enough for their shells to open. This can be done by grilling them or steaming them in a lidded pan for several minutes. Once opened, let them cool slightly then scrape the clam meat out of the shells and place in a bowl. The clams can be stored like this in the refrigerator until ready to serve.

You will want to smoke the clams just before serving them so they retain their flavor. Place all of the clam meat in a gallon Ziploc bag. Close the bag except for a 1" section. Take a smoking gun and when it is ready place the hose into the Ziploc bag and fill it with smoke. Seal the bag and shake gently to spread out the clams. Let the clams smoke for about five minutes.

If you have a traditional smoker, you can also briefly smoke the clams in it instead of using a smoking gun.

Place a sourdough crouton on a serving dish and top with a cube of the chowder base. The dish can be served hot or cold. If serving hot, at this point you can heat the dish in an oven on low as long as the temperature of the chowder cube stays below 100°F (37°C).

Add a smoked clam to the top of the chowder base, add a bacon baton, and top with some chives.


Help me improve my content, let me know what you thought of this recipe! Just click on a star below to rate it.
Average Recipe Rating (click star to rate)
Thanks, your rating has been saved! Please let me know any additional thoughts in the comments!