Although molecular gastronomy did not emerge until the late 1900's, this technique is something which goes back as early as 1674. Recorded in a French cook book is a recipe for beurre de Provence, also known as Aioli, the predecessor of mayonnaise, which is an emulsion. Also known as colloids, such mixtures contain particles which cannot be dissolved, but rather remain suspended due to the different properties of the ingredients used. 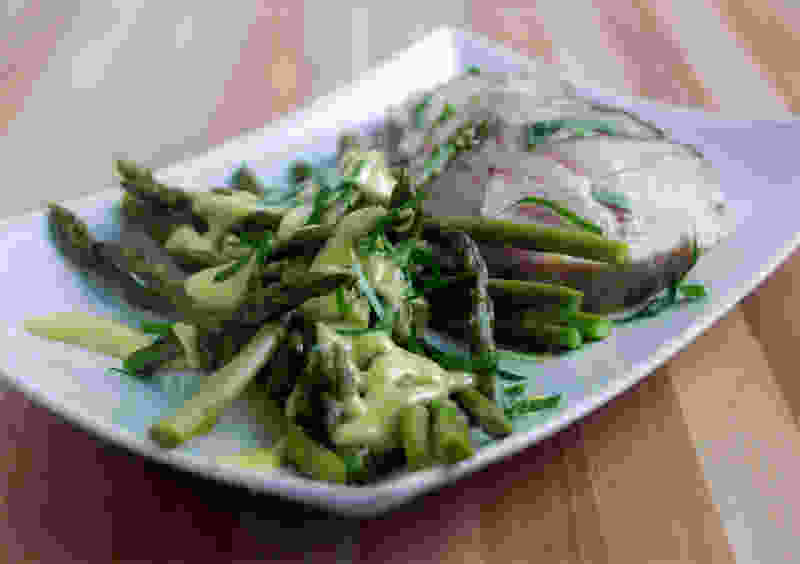 It is common knowledge that immiscible substances such as oil and water will not mix due to the difference in chemical properties. No amount of rigid shaking or mixing will allow such substances to come together. However, in the world of molecular gastronomy and modernist cooking, it is possible to turn heterogeneous substances to a homogenous compound through emulsion.

This technique can include the use of particles which are solid, liquid or gas. In many cases in the kitchen a mixture of water and oil is what brings about a colloid. In the case of oil and water, one of these two liquids becomes a base while the other becomes dispersed.

The end product of an emulsion may differ according to which substance becomes dispersed. Two main types of emulsions include oil in water and the opposite which is water in oil. When oil is diffused in water the end product may be something like a hollandaise sauce or mayonnaise. On the other hand when water is diffused a common result is butter or a vinaigrette.

An emulsion can either be formed spontaneously or more commonly as a result of movement known as "shearing power" like shaking or mixing. Movement is an important part of the process for many emulsions since it is what disperses the molecules into the base substance. Emulsifying agents may also be used to help stabilize the colloid, binding the liquids together. In cases where the emulsion is not successfully stabilized, components may separate again later on.

Uses of Emulsion in CuisineTop

Given the diverse properties of many ingredients used in the kitchen, emulsion comes in handy for many different purposes. Fat and water are both common products used in many dishes, as well as in basic cooking components. An oil in water emulsion can be used in the production of creams, sauces, aioli, milk, dressings, cheese and more. On the other hand water in oil emulsion can result in vinaigrettes, margarine, butter, spreads and others. 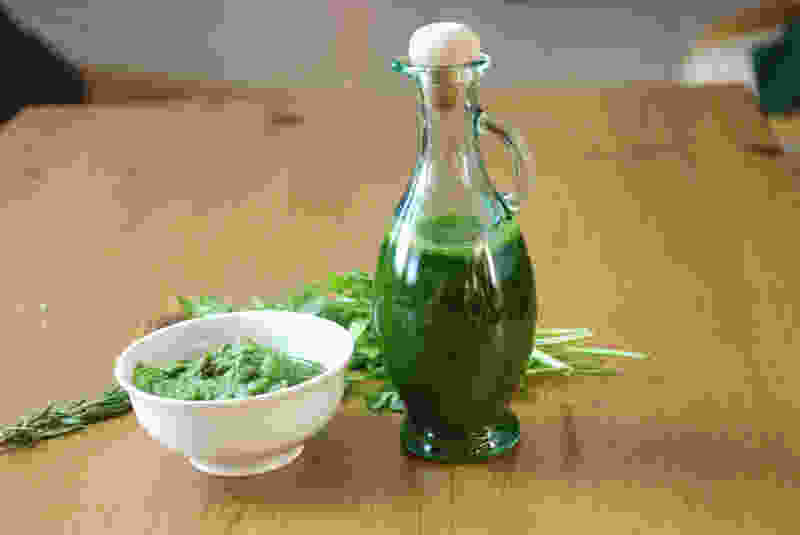 Other than being able to "bind" immiscible substances like oil and water together, emulsions can also ensure the creation of homogenous mixtures. As a result of this, longer shelf life can be given to a variety of food products. Aside from this, it also allows for the production of creative food products.

Texture and improved taste can also be created through emulsion. Many times the liquids which are combined come together and form various consistencies ranging from soft to hard and smooth. In some cases emulsion can be used to aerate liquids creating air bubbles and foam in food. The foam captures the flavor from the ingredients adding to the taste without contributing any heaviness or overwhelming the base flavors.

The process of emulsion can also be applied in cooking for thickening certain fluids. Regular liquid substances are given body as the fat and water are combined along with other ingredients. As a result the liquids become solidified and can be given shape. 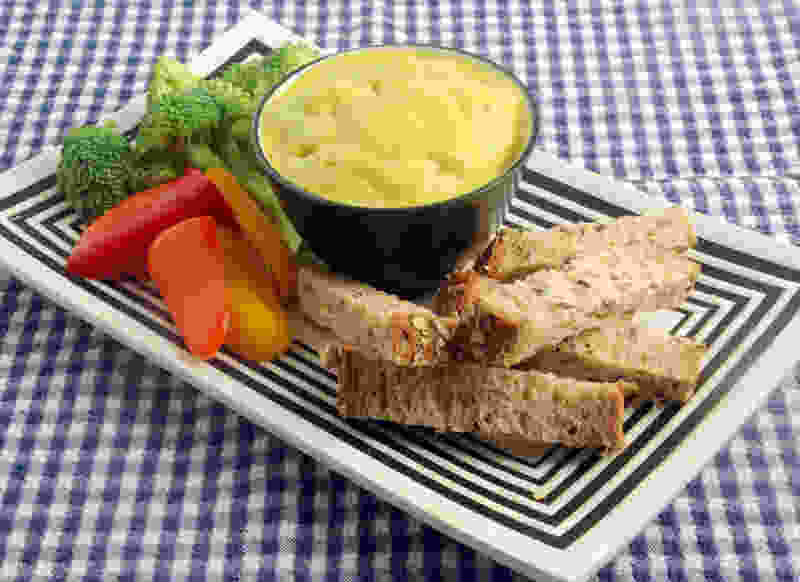 As mentioned earlier incorporating immiscible substances such as fat and water calls for the use of shearing in the form of various movements like stirring, mixing and beating. Often times a whisk or wooden spoon is needed for this process.

As these substances are made to blend together, it can be found in two different phases known as the dispersed phase and the continuous phase.

It should be noted that the more dispersed phase there is then the greater the chance of having the substances separate. Too little space in between the particles may cause them to touch and join together again.

The loss of movement may also eventually cause an emulsion to break. To stabilize this and emulsifying agent can be used. The agent works by coating the dispersed particles with a surfactant that increase kinetic stability.

It should be noted that emulsions are sensitive to both heat and cold. When exposed to increased heat, the molecules tend to move faster and may colloid with each other. On the other hand exposure to cold may cause quick cooling and the formation of crystals which pierce through emulsifying agents as it heats up. Both of these will cause a break down and separation of substances.

The term emulsifiers and stabilizers are often used interchangeably in the culinary world. Food emulsifiers can be classified in two different categories. 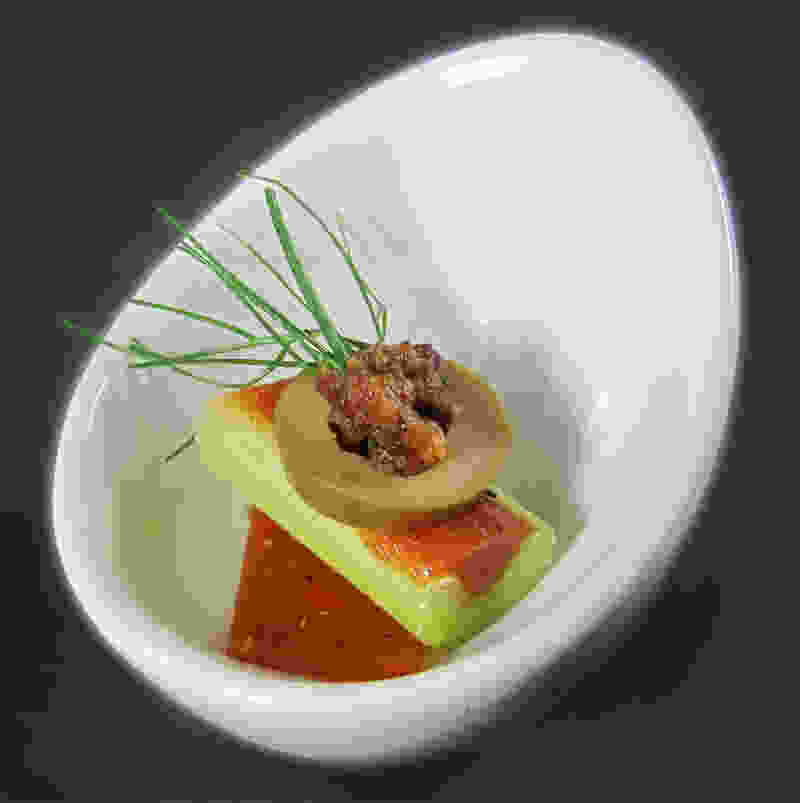 Natural Emulsifiers. Derived from plants and animals cells. These are presented as hydrated lypophilic colloids. Examples of stabilizers taken from plants are agar-agar, xanathan gum, mustard, honey and guar gum. Emulsifiers which are derived from animals can come either in the form of proteins such as eggs and soy beans which both contain lecithin. Another animal derivative is cholesterol.

Semi-synthetic Emulsifiers. These are ingredients which occur naturally but undergo processing. These are often taken from naturally occurring fats and oils. Examples of these include methylcellulose and carboxymethylcellulose which are both derived from cellulose. Lecithin naturally occurs in many foods and can be extracted. Semi-synthetic emulsifiers are non-toxic and often work better than natural stabilizers. These are also less prone to bacterial growth.

Aioli is simply a mayonnaise made with garlic and olive oil. This recipe uses an immersion blender to make the process super-easy and results in a light dip for vegetables or a spread on breads and toast. It's a popular addition to any party fare!

This recipe infuses the flavors of shallot, lemon, and tarragon into a vinegar and then makes it into a light, bright vinaigrette. This pairing adds several base layers of flavor to the fish. For a modernist twist, thicken it into a sauce with xanthan gum!

Infused vinegars are a great way to add subtle flavors to vinaigrettes and sauces. When making your own sous vide can compress the infusion process into a matter of hours instead of week or months. I like to use this refreshing raspberry vinaigrette on spinach salad or as a sauce on white fish.

This recipe is a great crostini topping for any party, especially if some attendees might be less adventurous eaters! It resembles a more traditional dish but it have a subtle modernist touch. Garnishing the white bean puree with lemon zest pulls in even more highlights to the food.

Sous vide salmon is a tender, soft meat that can be unlike anything cooked in a traditional manner. I pair it with spicy jalapenos and sous apples for a tart, rich dish.

Sous vide asparagus is similar to blanched asparagus but ends up with a stronger flavor and slightly firmer texture. It only needs a short cooking time unless the asparagus is really thick.

This sous vide tri-tip steak recipe takes full advantage of the rich, meaty cut and is tenderized through the sous vide process and pared with an exotic fennel, orange, and olive salad.

Glycerin flakes are commonly used to stabilize emulsions and to thicken or foam oils. Unlike many ingredients, they have to be dissolved in oil, not in water. They are high stability emulsifiers composed of monoglyceride and diglyceride taken from the fats of glycerin and fatty acids.

This is a simple modernist vinaigrette to make and utilizes both xanthan gum and lecithin to strengthen and thicken it. I really like the sweet maple syrup with the tangy balsamic vinegar. This goes well on salads, especially ones with berries. You can also add a little more xanthan gum and use the vinaigrette as a sauce on fish or chicken.

Soy lecithin is a modernist ingredient used to stabilize emulsions and foams. It is commonly used to create "airs" and other light foams.

All tags for this article: Emulsifying