The use of gels in cooking is not a completely modern innovation. As a matter of fact, it dates back in history as far as early as the 1600's in Europe where it was derived from the bones of animals. In Asia, it is part of many traditional dishes which use plant extracts. This classic cooking component and technique has taken on a new life in the form of fluid gels in modern cuisine. 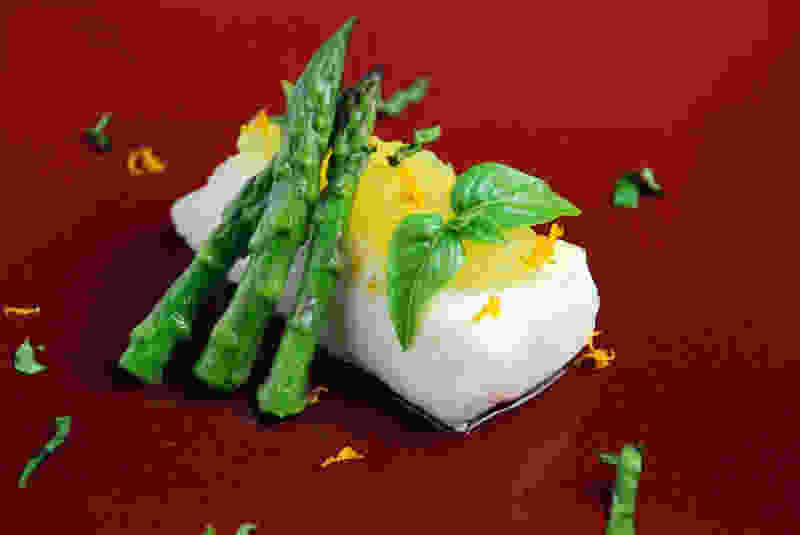 What Is a Fluid Gel?Top

As its name implies, this technique produces a substance which has properties that belong both to gels and fluids. Gels are solidified liquids which are immobile and with shape, exhibiting no flow due to the steady state it is in. On the other hand, liquids are free flowing without any fixed shape because of weak molecular forces and distance. Fluid gels in contrast, exhibit both flow and shape at the same time. This also results in substances which display viscosity to a certain extent, as well as the ability for suspension.

Also known as sheared gel, this unique concoction is a product of base liquids which have been set to a gel with the use of hydrocolloids. The solidified substance is then broken down to a liquid state with the use of shear thinning. Shearing refers to movement involving vigorous agitation. Another version of this technique involves the use of shearing as the hydrated hydrocolloids are cooling and setting.

The reason the breakdown is made possible lies in thixotropy. This is a characteristic of gelling agents which show them to be solid but eventually thin, allowing it to flow, when exposed to stress such as agitation. A number of gelling agents have the capacity to solidify and become liquid without going back to a complete gel. In the aspect of cooking, liquid gels display properties of both a gel, a puree, and a sauce, all at the same time.

Use of Fluid Gels in CuisineTop

The technique of combining liquids and gels in a single substance offers a great deal of possibilities in modernist cooking. It contributes to a number of gastronomic experiences that diners can experience including: 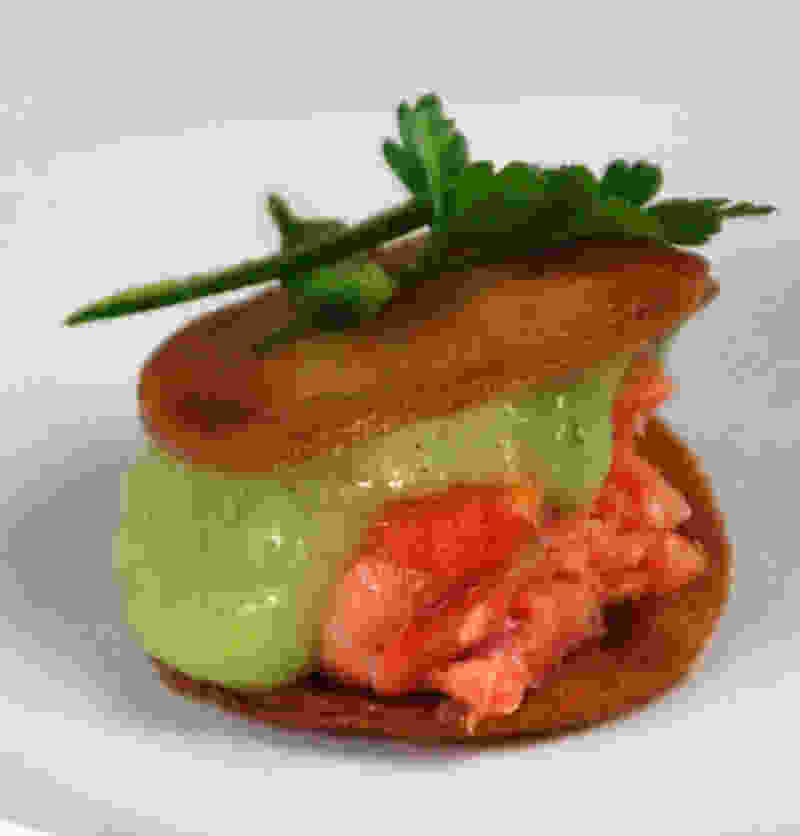 In the world of cooking many liquids such as vegetable extracts and juices come filled with flavor. However, it may not always be possible to use these liquids if incorporated directly in dishes. By turning such liquids into fluid gels it becomes possible to capture the flavor carried it in without having to deal with its completely liquid state.

With the combined properties of fluid gels, this provides an array of possibilities for consistency. For starters it provides body and fullness to what are normally flat liquids. Due to the gelling properties, shearing gels are also capable of providing smoothness and creaminess. These can complement and improve textures in dishes when used alongside food with other consistencies.

The appearance of food always plays a big role. Fluid gels allow the usual liquids to be presented in a different manner. Its stability makes way for these to be spread, piped, dropped and more. The presence of hydrocolloids also makes it possible to suspend various ingredients regardless of size and type. Creating clear and thick fluids is also made possible. Rather than using traditional thickeners that may change the taste or make liquids opaque, sheared gels provide viscosity without any clouding. 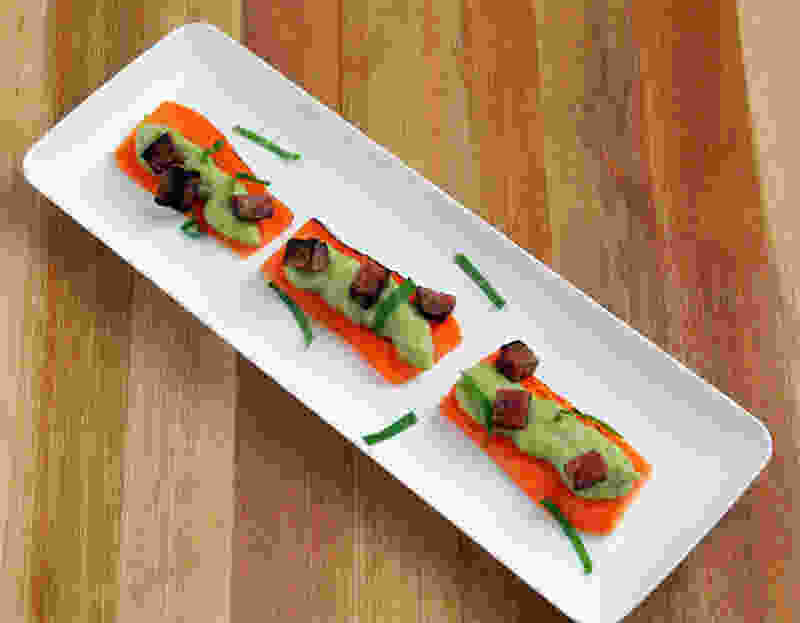 More than just presenting food differently, this technique makes it possible to come up innovative dishes. For example, sheared gels can work as barriers between foods. It can also be heated up to certain temperatures without melting, making it possible to serve hot gels.

The method of creating a fluid gel can be described as the mechanical deformation of a fragile gel using a process known as shear gelation. As mentioned earlier, the production of fluid gels begins with the hydration of hydrocolloids, also known as gelling agents, in a base liquid. As hydrocolloids, the molecules in gelling agents have an affinity for water. Hydrocolloids have the ability to absorb as much as three times its weight of water.

The presence of the fluids allows the molecules to absorb water through hydrogen bonding and each one becomes individualized. During the process of hydration, polymer chains arise and as the water gathers around the molecules and are attracted to sugar units it becomes trapped between the spaces. This restricts the movement of water causing the liquid to stay within. Thus, the gelling process for the liquid begins. 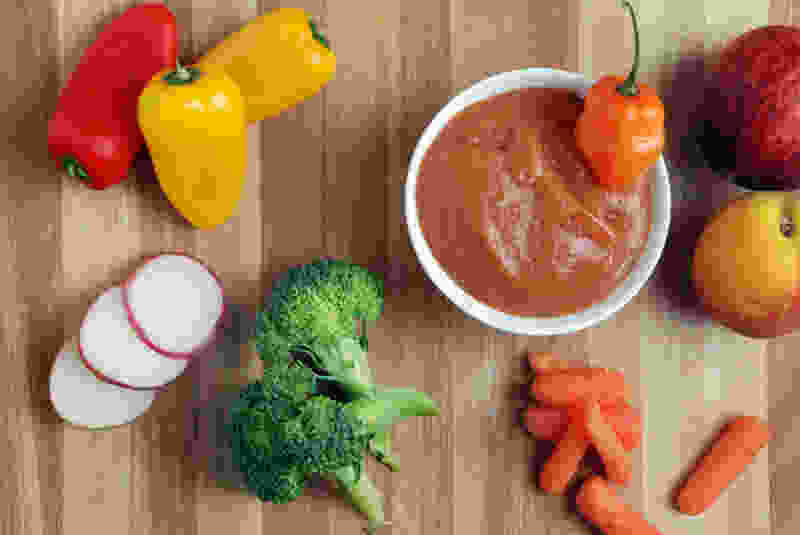 As mentioned earlier, shearing is applied on the onset of gelation or after it occurs. Shearing constitutes the mechanical breakup of the clusters which form the gel. In turn, this disrupts the process of networking in the polymer chains. The present force allows fluids to slide past each other affecting a fluid's viscosity.

Flow properties of fluid gels are directly linked to the amount of shear applied, as well as velocity. Shearing with a strong force results in narrow particles distributed throughout. On the other hand, a weak shear force will result in larger and uneven particles. For most thixotropic gelling agents, a higher amount of shear will result in a thinner gel.

This age old gelling agent is perhaps the most popular ingredient used for creating fluid gels. Taken from the cells in the walls of red algae. It has gained popularity as an ingredient for fluid gels since it breaks gels with shear but still maintains a certain amount of viscosity. It also has a good tolerance for heat allowing for the creation of hot fluid gels. 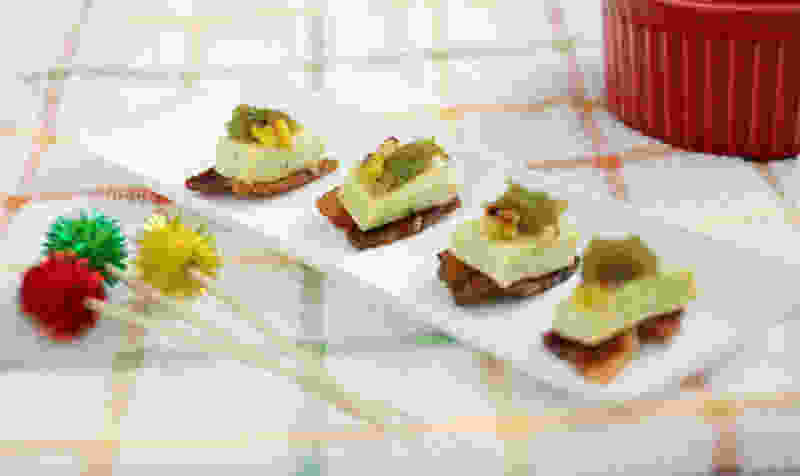 Produced through the bacterial fermentation of calcium hydrates in a specific type of algae. There are two types of gellan: high acyl and low acyl. Both types of this anti-settling agent, stabilizer and thickener can be used to form fluid gels, however low acyl gellan is more commonly used. Sheared gels made with this ingredient tend to be thinner than those made with agar.

These two gelling agents display the best characteristics for creating fluid gels. Other gelling additives may display a reaction to shearing; however these may not produce the best desired results. Carageenan for example, may break gel with shearing but tends to reform afterwards. Gelatin may also display fluid gel properties however; it has a tendency for syneresis, a condition where liquid seeps out.

Duck is one of my favorite meats to eat. I love the combination of tender meat with rich, creamy fat. In this recipe I pair it with some grilled asparagus and a blackberry-port pudding made from an agar fluid gel.

I turn the sous vided brisket or chuck roast into shredded beef for flavorful carnitas covered in a sweet and spicy tangerine-chipotle sauce. I serve them with corn tortillas and avocado so they are easy to pick up and eat.

I really like how the halibut goes with the sweet and tart citrus pudding. This is a simple dish but one that is full of subtle flavors. The orange and lemon help complement the halibut and the basil adds just a hint of spice to it.

Looking to take your guests by surprise visually but still deliver that familiar and well-loved taste of peas and carrots? This recipe tops a roasted carrot plank with pea pudding and some pancetta for added flavor and texture. Zip it up with a modernist twist!

Bacon and bourbon are two of my favorite foods and this recipe combines them in a smokey, spicy BBQ sauce that is great on wings, pulled pork, brisket, or about anything else you can think of. The sauce itself is really tasty but the bacon chunks add great bursts of flavor.

This great party snack use a crispy bacon base topped with a creamy corn custard and a spicy poblano chile fluid gel to make a rich and complex one-bite snack.

This dip recipe combines the spicy heat of habanero peppers with the sweet taste of fresh ripe peaches. The resulting tangy dip is great on vegetables or even meat. By altering the amount of peppers used, you can raise or lower the heat to suit your guests.

These Mexican inspired salmon bites pack a lot of flavor in a little package. The acidity from the tomatillos compliments the salmon perfectly and the crunch from the fried tortillas adds great texture.

The modernist technique of gelling or gelification is used very often to add texture and to create unique presentations in molecular gastronomy.

All tags for this article: Fluid Gel, Gels