Corn, bacon, and poblanos are a fantastic combination. I love using them in stir fries and chowders, on burgers and just about everything else! This recipe turns them into a fun party bite with a crispy bacon bottom topped with a sweet and creamy corn custard and spicy poblano pudding.

For a more refined custard you can strain the corn puree, though I like it a little more rustic. For a larger serving size, you can chill the corn custard in small bowls that you can top with the pudding and bacon. 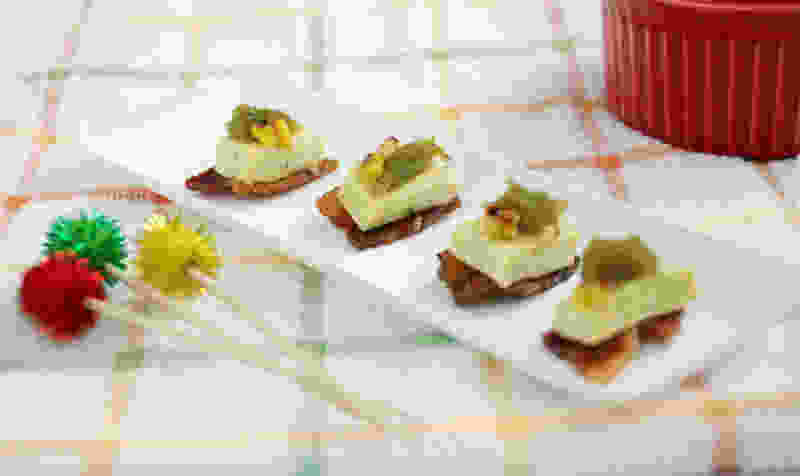 If you would like more information about the modernist techniques, ingredients, and equipment used in the roasted poblano, corn and bacon bite recipe you can check out the following.

For the Corn Custard

For the Poblano Pudding

For the Bacon Squares 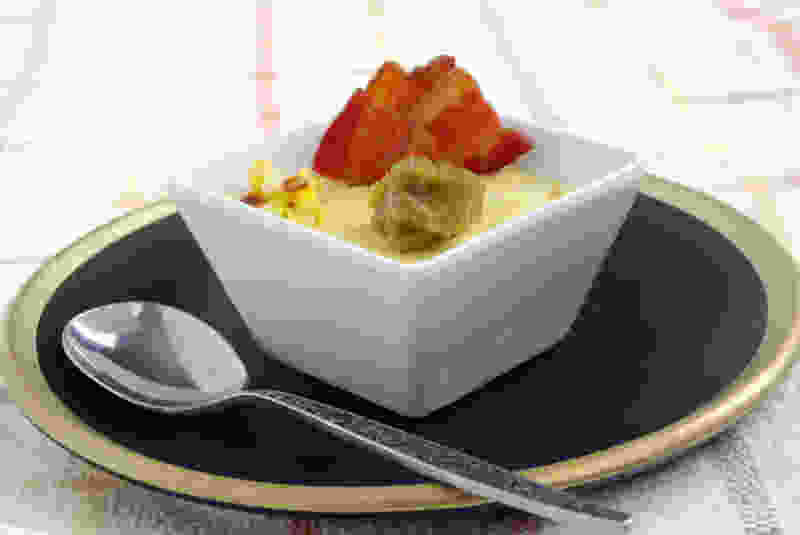 For the Corn Custard

Lightly oil the corn then salt and pepper them. Grill or roast them until softened and some kernels are beginning to brown. Remove from the heat and cut the kernels off, reserving 20 to 30 for garnish.

Add the cooked corn and the remaining ingredients to a blender and process until pureed and smooth. Taste for seasoning and add salt and pepper as needed.

Pour the corn puree into a pot, bring to a boil and whisk for 30 to 60 seconds. Remove from the heat and pour into a container to a depth of 19mm (0.75"). Let cool at room temperature, or in an ice bath, then place in the refrigerator to finish setting.

For the Poblano Pudding

Lightly oil the peppers, salt and pepper them, then grill or roast them until softened and starting to brown. Remove from the heat. Remove the seeds and stem from the peppers.

Combine the peppers, chicken stock, and agar then puree until smooth. Salt and pepper as needed.

Bring the pepper puree to a boil while stirring occasionally. Let simmer for 3 to 5 minutes, stirring regularly. Then pour into a container and let set. Once fully set, puree the gel until smooth.

For the Bacon Squares

Place a bacon square on a plate. Top it with a square of the corn custard. Add a dot of the poblano pudding. Top with a basil leaf and a corn kernel or two then serve.


Help me improve my content, let me know what you thought of this recipe! Just click on a star below to rate it.
Average Recipe Rating (click star to rate)
Thanks, your rating has been saved! Please let me know any additional thoughts in the comments!