This article is a part of my What's Your Passion? interview series, providing intimate interviews with people passionate about their craft. Is there someone you'd like me to interview, or are you passionate about a certain craft? Please let me know!

Dailey Crafton is from Levenaut Beer Company (formerly Conduit Beer Company) and I heard him speak at Taste Talks Brooklyn on a panel about fermentation. I've done a little home brewing, mainly as the helper for my friend, and I was fascinated by Dailey's approach to brewing. He takes full advantage of wild yeast, which is pretty incredible.

I asked Dailey to answer some questions so you all can get to know his process better. 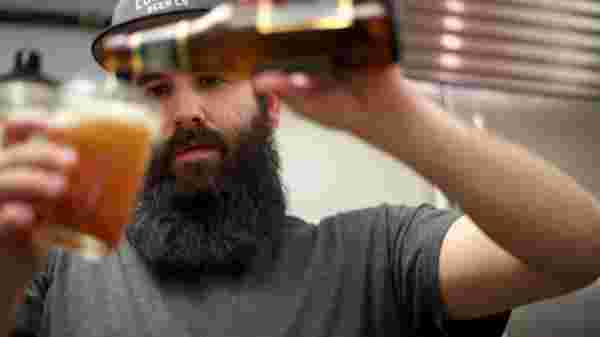 Jason: When I heard "wild yeast", I assumed you meant specific strains of wild yeast that you could buy. But that is about as far from the truth as it could be. What do you really mean by wild yeast, and how did you get into using it?

Dailey Crafton: Wild yeast to "tame yeast," I suppose, are not so different as wild blueberries from grocery store blueberries. One is out in the wild and one is grown on a farm/cultivated in a lab. A key difference, however, is that wild yeast can be a bit more of a crap shoot in terms of the flavors it will produce. But, once you've captured pleasant strains, you can re-pitch them indefinitely. Which is what I do.

I got introduced to the idea of fermenting with wild yeast by Jeff Mello and Bootleg Biology. I found one of their "backyard yeast wrangling toolkits" at my local homebrew shop. This was my first introduction to the idea and it blew my mind. The popular wisdom in homebrewing was basically that wild yeast is the Devil and will f*** your beer up. Bootleg Biology preached something to the contrary. With their kit, I began foraging yeast off of fruits in my garden.

Jason: I loved hearing the story of your "magic log" you brew with, and getting to see it at Taste Talks Brooklyn. How did you decide to use a log to brew beer and how did you find your specific log? Are there any other very unique items you've gathered wild yeast from? 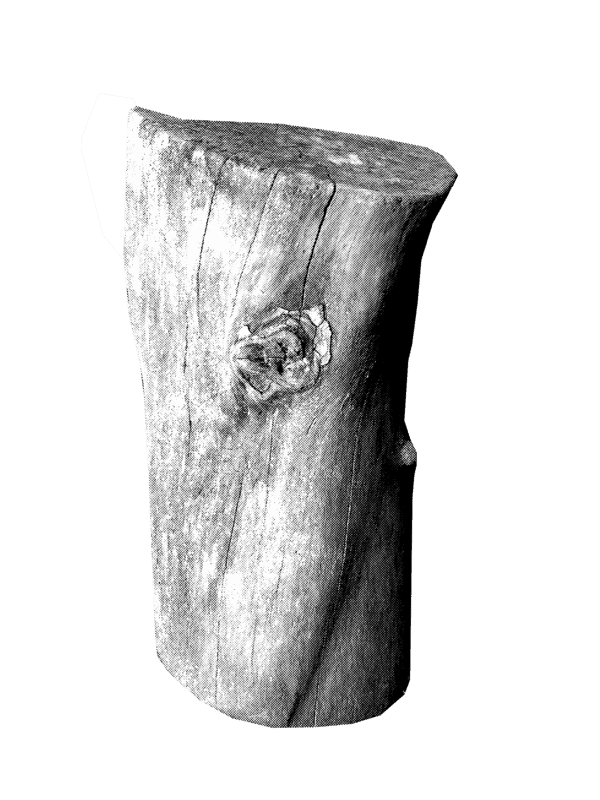 Dailey Crafton: As I got more into using wild yeast, I starting reading about ancient methods of fermentation and brewing. This was in a time before people even knew what yeast was, but by a process of trial and error and happy accidents, they came upon some strains that were suitable for fermenting their alcoholic beverages. These strains ended up living in the wooden paddles with which they were stirring their wort. By and by, a good strain would take hold on a certain paddle and the people knew that that was the paddle that made the good beer. The "magic paddle."

I found my log in Cooper Park in Brooklyn. It was rather weathered and dry and cracked. So, I figured it probably had some interesting stuff living on/in it. I was willing to gamble a 5 gallon batch to find out. And, dipping said log into a sugary solution full of maltose (one of the main sugars in wort) is also going to go a long way to ensure that microbes that are more efficient at fermenting maltose will have a better chance of out-competing the others. Brewer's yeast (saccharomyces usually) is what it is because it IS the best at fermenting maltose.

Imagine a big tub of cookies. Now imagine you dropped Big Bird and Cookie Monster into said tub full of cookies. Who will out compete whom and ultimately become the dominant species? Right. So it is with the log, the microbes on it, and the maltose.

It did end up working out. It wasn't a sure thing, but that particular log fermented the beer well.

I have also cultured strains from ants. Here's a good interview on that whole thing on Daily Ant.

Jason: Homebrewing has a huge focus on sanitation, so I'm sure people are wondering how you know the beer ends up being safe to drink when you are putting logs, fruit, and other unsanitized items in it. How do you manage that?

Dailey Crafton: The best and more sure way to know if the beer is safe to drink is, ironically, alcohol production. Alcohol is an anti-septic so it makes the beer "safe" (and more fun). Alcohol production is one of the mechanisms the brewer's yeast uses to suppress other organisms and gain dominance. The way to measure whether you've had good alcohol production is with an instrument called a hydrometer. The hydrometer measures the density of any given liquid. So, you take a measurement before you ferment the beer. The pre-fermented solution (called wort) will be very sugar rich and ipso facto very dense. Then you take a measurement sometime down the line. Alcohol is much less dense than sugar so if you've gotten good alcohol production the measurement will read as a much less dense liquid.

The brewer's yeast also produces a lot of CO2, rendering the environment anaerobic, which precludes a whole host of other would-be spoilers of the beer.

Jason: Since you use wild yeast, if you brew that "perfect" beer some day, does that mean it was a one time thing and isn't replicable? 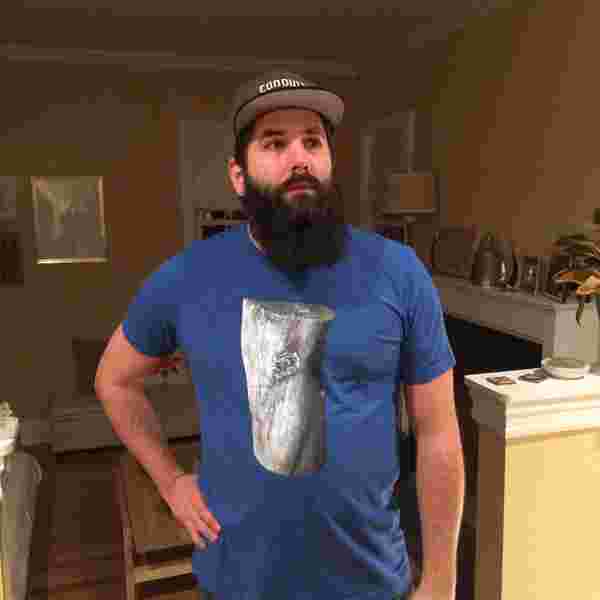 Dailey Crafton: Well, I do have a couple recipes that I can replicate pretty precisely. I've re-pitched my log strain so many times, I suppose that some could argue that it is no longer wild but is now cultured. But I will say that I do not quarantine it. My best guess is that the strain on the log has become so dominant that it simply out-competes everything else.

I've been reading a good bit about the old Scandinavian brewers' Kveikstokks. Google image search Kveikstokk and you'll find these pretty cool looking carved-wood pieces that those brewers would use to house their yeast cultures. Some modern Scandinavian brewers still use this method and some of the strains have been analyzed and been found to be very healthy and very pure. I've started making some of my own and intend to inoculate them with the cultures from the original Magic Log.

I've also isolated and banked strains from the log with Bootleg Biology, just in case. I've started brewing a little with that isolated strain to compare/contrast, but I'm still using the un-quarantined version mostly. 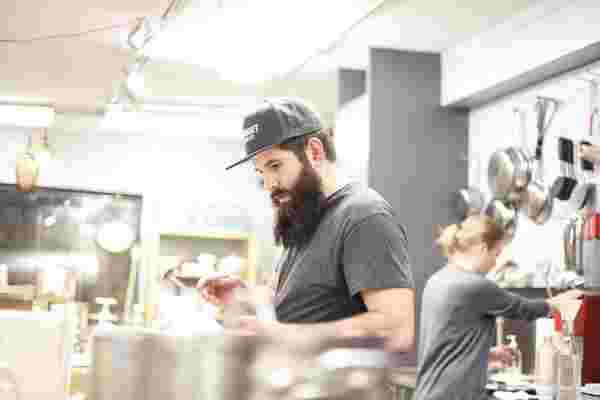 Jason: Levenaut Beer Co does events where you go to an office, home, or restaurant and teach people how to homebrew beer. What made you decide to reach out into the community this way? What have you learned from this experience?

Dailey Crafton: Well, we changed our company name to Levenaut. "Leve" from the Spanish "levadura" & French "levure," both meaning "yeast," or "leaven" (a fermentive substance) and "naut," denoting an explorer (like "astronaut"). We're fermentation explorers! But, yes we do onsite beer and live brewing events.

Levenaut was born from a question; that question being, "How can I make a living doing beer stuff without having to go through the rigmarole of getting a brewer's licenses and all the bureaucratic nonsense?" Ha! Levenaut was the answer to said question. It combines my brewing skill set with my teaching and presentation skill set. Add to that the fact that my wife/partner Cindy and I have been working professionally as designers for more than 10 years. So we're able to articulate a visual brand identity for Levenaut as well. I find niches tend to be at the intersection of multiple skill sets. Lots of people know how to brew. Lots of people know how to teach. Lots of people know how to design. But finding all those skill sets intersecting in one person/couple is less and less likely the more skills you stack.

Jason: I think the final question is the most important one: how do we get to taste your beer? I had some at Taste Talks Brooklyn and it was really funky and delicious.

Dailey Crafton: You taste my beer by putting it in yer mouth. Waka waka! But to find the beer will prove to be a bit more of an adventure. Going back to the me-not-having-a-brewers-license thing, I can't sell the beer. So, every once in a while I'll just post up somewhere around the city and give it away. I have a mailing list that I use to announce when/where I'll be giving beer away. And that's only thing I use that mailing list for; to announce free beer. It's the best kind of mailing list to be on. You can sign up for it at levenaut.com/contact

Jason: Thanks again for taking the time to answer some questions from me, I really appreciate it!

Is there someone you know that I should interview for What's Your Passion? Have any follow up questions you want answered? Let me know in the comments.

All tags for this article: Interviews, What's Your Passion