Chuck is my go-to budget steak because when cooked at 131°F (55°C) for 24 to 48 hours it comes out almost like a ribeye. At 150°F (65°C) it turns into the perfect pot roast, and if you want a more traditional braise-like pot roast you can cook it at one of the braise-like temperatures for a day or so. 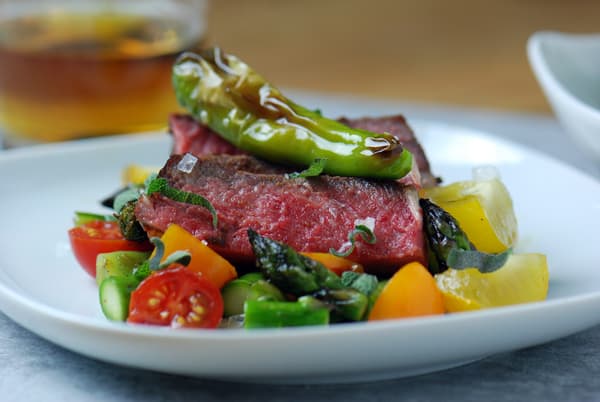 Chuck roast is one of my favorite cuts of beef, especially when using sous vide. It is super flavorful and really, really versatile. It's also inexpensive and easy to find, making it a great option for roasts or steaks!

When cooking a chuck roast you have two main options, either make it tender like a great steak or cook it at a higher temperature to approach a more traditional braise-like texture.

This is why sous vide chuck roast temperatures and times can be all over the place, because it really depends on what you want your final dish to be. Do you want a juicy steak? How about a succulent pot roast? Or maybe shredded beef? You can do any of those with a chuck roast, but they all take different times and temperatures! 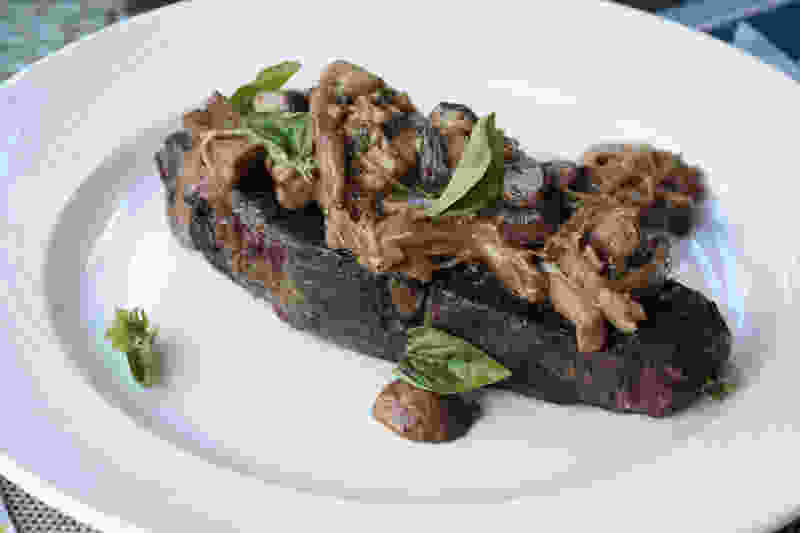 What Temperature for Chuck Roast Top

People always ask what the best sous vide chuck roast temperature is, and the only honest answer is "it depends". As mentioned above, there are multiple dishes that you can create with chuck roast, so a lot of it comes down to what you are looking for.

If you want a good steak-like texture, then you usually will want to cook it at medium-rare to medium temperatures. This is usually 130°F to 140°F (55°C to 60°C). If you prefer a rare steak, then you probably want to look for another cut, because chuck roast needs to cook for at least 24 hours, and sometimes up to 48 hours, which isn't safe at rare temperatures.

If you are looking for a more well-done or lightly braised pot roast temprature, then I will usually go with 150°F (65°C). This results in a well-done, but still surprisingly juicy piece of meat. Instead of viewing it as a "ruined steak" as many people do, I view it as a "perfect pot roast". 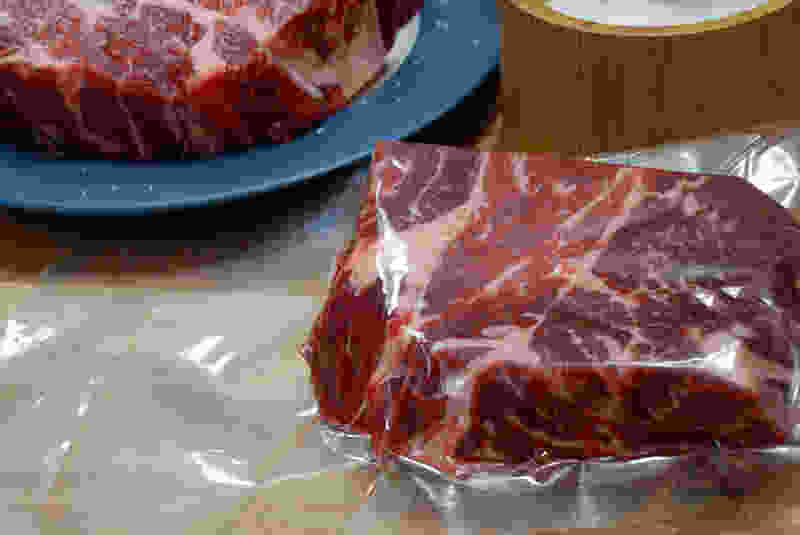 How Long to Sous Vide a Chuck Roast Top

I love ribeye steaks but they are so expensive I tend to only have them as a special treat. Luckily for me, if you sous vide a chuck steak at a standard steak-like temperature for a few days it comes out tasting almost as good as a sous vide ribeye, at only about a third of the cost.

In order to tenderize the chuck steak enough for it to be enjoyable you need to cook it for at least a day, and sometimes up to three days. I tend to do 36 hours but it will depend on the quality of steak you use. I prefer 131°F (55°C) but you can do as high as 150°F (65°C) depending on how well-done you like your steak.

There will still be some fat you need to cut off, but usually not too much. I prefer to lightly salt the chuck steak before sous viding it but some people prefer to sous vide it unsalted.

If you want something along the lines of a more traditional pot roast-type meat you can increase the temperature. It's a wonderful cut of meat with lots of fat to render leaving a flaky, moist meat behind. 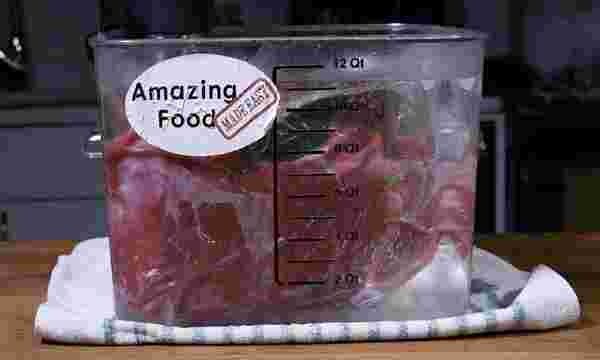 How to Sear a Chuck Roast Top

Much like sous vide ribeye, prime rib and other fatty cuts, chuck roast benefits greatly from a good sear.

Once the sous vide chuck roast is tender, I will usually let it cool before searing it. And for the best sear, I'll use step chilling and then reheat it during the searing process. Or you can give it a bump to 100°F (37°C) before searing up to the final temperature.

This works best when searing with a cast iron pan or a grill.

You can also use a sous vide torch to sear the meat when it is done. This won't raise the temperature any, so it can easily be done fresh out of the bag.

Chuck is cut from the shoulder of the cow and is often used interchangeably when identifying cuts of meat. A chuck roast is one of the most economical cuts that yields the most flavor when cooked properly. Chuck roasts are usually flat pieces and 2 to 3 inches thick. Chuck steaks are a thinner cut of chuck roast. These types of steaks can have bones or be boneless. 7-bone steak is a common reference to this steak because the bone is in the shape of the number 7 (not because it has 7 bones).

Both chuck roasts and chuck steaks need either sous vide or moist heat cooking methods due to the connective tissue in this cut. Certain cuts of chuck roast include several muscles separated by connective tissue. Oven roasting is not generally recommended.

Chuck roasts have a balanced meat to fat ratio. They may be boneless or contain bones. Chuck roast is commonly referred to as the typical pot roast. This is also a great cut of meat to cook in a slow cooker. It is often the type of beef used as stew meat and ground beef. Beef from the shoulder region is also marinated and used in kabobs.

One way chuck steaks can be grilled or broiled is if they have been properly marinated. Marinating allows this tougher cut of meat to become tender while cooking. However, to ensure the steaks are perfectly cooked, sous vide the chuck steaks first and then finish them with a quick sear on the grill!

Chuck steak is often used as the cubes in beef stew and is considered the best cut to use for ground beef because of its fat to muscle ratio.

In the United Kingdom, chuck roast is commonly served as the meat during Sunday Roast, a traditional meal. In this type of meal, it is often served alongside Yorkshire pudding and roasted potatoes and vegetables. Although a traditional British meal, it is similarly served in this manner in the U.S. and Canada. In North America it is known as Yankee Pot Roast and also served with potatoes and vegetables.

In the United Kingdom, the chuck steak is known as "braising steak". Thickly cut chuck steaks can be used as pot roasts. Because of its rich flavor, beef chuck is often used in chili; chuck stays moist after longer cooking times as opposed to sirloin which can dry out.

Other Names for Chuck Meat

For Chuck Roast: Rump Roast, Bottom Round Roast, and Under Blade Pot Roast

What is the Best Sous Vide Chuck Roast Temperatures and Times?

Do you have experience cooking chuck roast? Let us know your thoughts in the comments below!

What Are Some Sous Vide Beef Chuck Roast Recipes?

Here are several of the Beef Chuck Roast recipes that I recommend trying out.

This presentation came about from my frustration with the exchanges in my Exploring Sous Vide Facebook group. Someone would ask "What is your recommended time and temperature for chuck roast?" and there would be a wide variety of answers. Why? It's very confusing to newer sous viders!

I love sous vide chuck steaks, but to offset their fattiness I try to pair them with really light sides. This recipe uses sauteed asparagus and cherry tomatoes, along with shishito peppers to fill out the meal and keep it from getting too heavy.

I turn the sous vided brisket or chuck roast into shredded beef for flavorful carnitas covered in a sweet and spicy tangerine-chipotle sauce. I serve them with corn tortillas and avocado so they are easy to pick up and eat.

If you sous vide a chuck steak for a few days it comes out tasting almost as good as a ribeye, at only about a third of the cost. For this recipe I serve the chuck steak with a flavorful fresh pesto and crunchy deep fried brussels sprouts.

I'm a huge fan of steak, but sometimes I don't want to kill myself with a really heavy meal. Serving the steak with a lot of vegetables is a great way to lighten it up and add a lot of flavor. This sous vide chuck steak recipe combines the steak with some asparagus, cherry tomatoes and shishito peppers.
|