Sous vide strip steak is one of my favorite steaks to cook. Strip steak is less expensive than ribeye or filet because it can be a little tough, but with sous vide it can be cooked long enough to tenderize it. It only needs to be heated through, usually 2 to 4 hours, but I'll often let it go an extra few hours to soften it up some.

What is the Process for Sous Viding Strip Steak? Top

Strip steak is the general name for a whole slew of similar cuts such as top loin strip, New York strip, Kansas City strip, top sirloin, top loin, and shell steak. Strip steaks are a tender cut that have decent marbling but are still leaner than a ribeye.

It is a good middle of the road steak, in terms of marbling, texture, and even price. It has a denser texture than many of the other cuts and there are also no large pockets of fat in a strip steak. 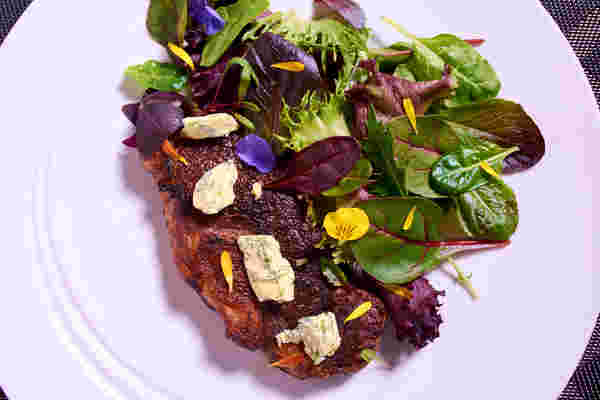 Strip steaks come from the short loin, located on the top of the cow about halfway back, which is where T-bones and porterhouses also come from. The tenderloin is also located in that region.

Strip steak is tender, so it only needs to be heated through, usually 2 to 4 hours for an average strip steak. However, strip steaks do sometimes have a bite to them, and I will often sous vide them for several hours longer to further tenderize them, especially when I am using a lower-quality steak.

I like to serve sous vide strip steaks with a flavorful, fat-based sauce to add some more richness to them. 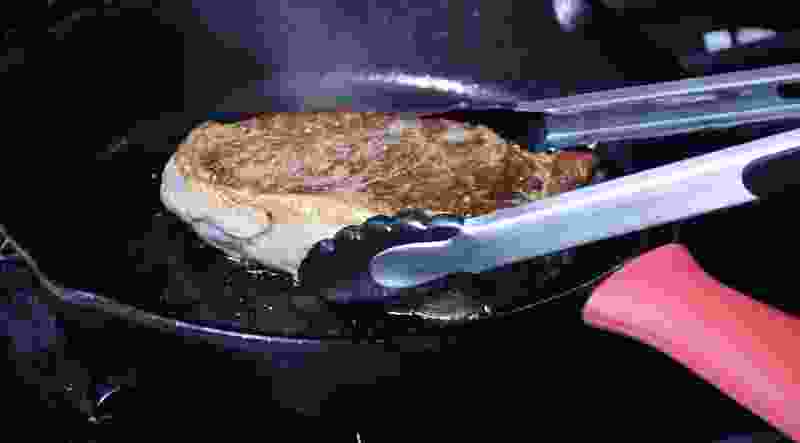 What Are the Different Types of Strip Steak? Top

Strip steaks are known by a lot of different names. Some are the exact same cut, others have very minor differences. When using sous vide all strip steaks can be cooked the same way, but it does help to know the minor variations of them.

All of the strip steaks come from the loin primal, specifically the strip loin section of the short loin. The cuts from the loin are all tender, including t-bones and tenderloin.

There are a lot of names, and very minor differences, so for most people, just remembering that if it has "strip steak" anywhere in the name, it's probably an almost indentical cut. 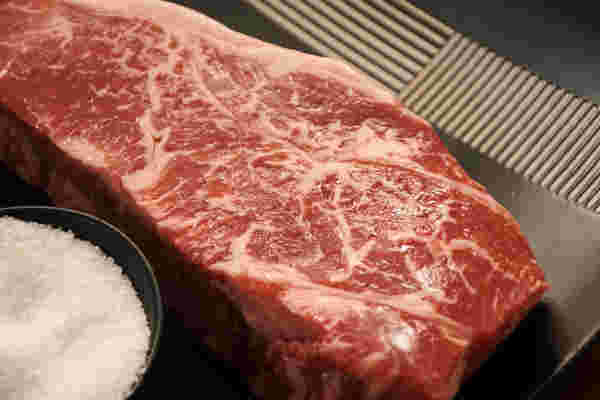 What is a Short Loin

The short loin is the name for the entire loin primal that you can cut your own strip, filet and t-bone steaks from. It usually still has the bone attached. It can be hard to sous vide a whole short loin because it is so big, but with a proper bag you could make an amazing presentation. It is normally cut into the individual steaks themselves.

What is a Strip Loin

The strip loin is the name for the entire loin that is removed from the short loin. This may be bone in or bone out and is can be broken down in many strip steaks.

What is a Top Loin Strip Steak

What is a New York Strip Steak

A New York Strip is probably the most common and all inclusive name for all of the cuts. As mentioned above, they also all sous vide pretty much the same way.

Many of the names are also used interchangeably (or incorrectly) over the years, so they can all mean pretty much the same thing. That said, here are a few common varieties and how they "might" be different.

What is a Kansas City Strip

A Kansas City strip steak is basically a normal New York Strip with some bone on it. When making sous vide Kansas City Strip be sure that the bone is not sharp or it could puncture the bag.

What is a Shell Steak

A bone-in strip steak with no tenderloin attached is sometimes referred to as a shell steak.

Other Names and Similar Cuts

The other names for strip steaks seem to have no real different between them and the above. They are the Top Loin Steak, club steak, Ambassador Steak, Boneless Club Steak, Hotel-Style Steak, and Top Loin Strip Steak. And any that are "first cut" usually have more gristle that isn't present on the steaks cut from the middle of the loin.

In France, it is called contre-filet. Then to confuse matters, it is known as a Porterhouse and Sirloin or striploin steak in Australia and New Zealand and a sirloin in the UK and Ireland.

If the strip still has the full bone and there is filet on the other side, it is a t-bone or porterhouse steak. 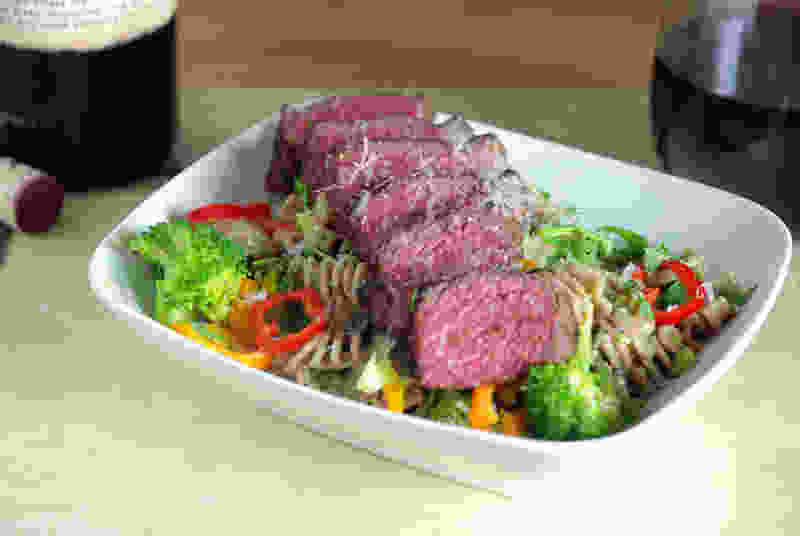 The strip steak is obtained from the short loin primal cut. The short loin is in the middle area of the cow's back. It is in front of sirloin and above the flank. This is an expensive cut of meat because it is of very high quality. This cut is particularly tender because the muscles located in the short loin are not used very often. However it is not as buttery as the tenderloin or the ribeye.

The strip steak is found between the sirloin and the ribs. It is a long muscle situated in the rear that is found on top of the cow's ribs. The most tender strip steak is located in the front of the rib. It is round in shape and is well-marbled indicating its high quality. Steaks obtained from the back of the loin are of lesser quality because they can contain connective tissues.

When buying the strip steak, select the one that shows the most marbling and is about one inch thick. You can use the sous vide cooking methods to prepare it to perfection.

Other Names for Strip Steak

What is the Best Sous Vide Strip Steak Temperatures and Times?

Sous vide strip steak is one of my favorite steaks to cook, because it is less expensive than ribeye or filet. It only needs to be heated, about 2 to 4 hours, but I'll often go an extra few hours.

Do you have experience cooking strip steak? Let us know your thoughts in the comments below!

What Are Some Sous Vide Beef Strip Steak Recipes?

Here are several of the Beef Strip Steak recipes that I recommend trying out.

This recipe for sous vide New York Steaks combines them with a fresh blueberry shrub foam and spicy apritcot gochujang preserves to round out the flavors.

Sous vide strip steak is one of my favorite meats to make. It's rich and flavorful, but not too fatty or tough. I love to pair it simply with a crisp salad and some herb butter to round it out. And don't let the picture fool you, it makes for an amazing weekday meal that comes together really quickly.

How Do You Get Steakhouse Texture from Sous Vide - Ask Jason

In a recent Ask Jason session Paul asked "Texture seems to be a problem with my steaks. What about a 2-inch thick New York strip to get steakhouse texture? - Paul McLester See how Jason answered Paul.

Sous vide strip steak is one of my favorite steaks to cook. Strip steak is less expensive than ribeye or filet because it can be a little tough, but with sous vide it can be cooked long enough to tenderize it. It only needs to be heated through, usually 2 to 4 hours, but I'll often let it go an extra few hours to soften it up some.

Simple sous vide strip steak is quick and easy to do with your sous vide machine.

This sous vide recipe cooks bison then combines it with an egg-based carbonara sauce topped with sauteed fresh vegetables. It also works well with tender cuts of either deer or elk meat.

This sous vide recipe for steak salad is a different use of the sous vide technique. Instead of using sous vide to cook the meat for a long period of time, you use it to add perfectly medium rare steak to your salad. The thyme and garlic help add a little kick to the steak while the honey mustard dressing adds a strong flavor to the salad itself.