How to Sous Vide Beef Sirloin

Sirloin is one of my favorite "every day" steaks. It's mid-priced and decently tender with a milder but still beefy flavor and light marbling. The sirloin isn't as tender as many of the other steaks so I'll often sous vide it for 8 to 10 hours, just to tenderize it a little bit. However, it is still very good when just heated through. 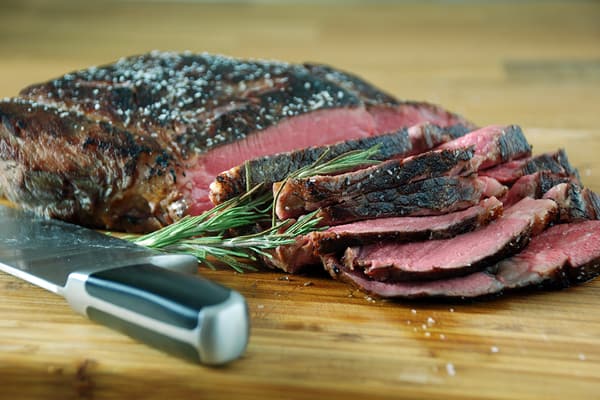 The sirloin is most often served at mid-tier steakhouses and it holds up to sauces very well. It has a firm bite to it and seems to be a bit more dense than other cuts. Since it is also on the less expensive side, it is easy to eat more often.

Sirloin comes from the sirloin primal near the rear of the cow. There are many cuts from that primal, including regular "sirloin steak", tri-tip, and top sirloin which is more tender and sometimes referred to as a strip steak.

The sirloin isn't as tender as many of the other steaks so I'll often sous vide it for 8 to 10 hours, just to tenderize it a little bit. However, it is still very good when just heated through, usually 2 to 4 hours for an average one.

There is really no difference between a sirloin steak and a sirloin roast. If you take a sirloin roast and cut it into slabs, you now have sirloin steaks. The sous vide time is usually still based either off of the thickness of the meat or it is cooked longer to tenderize it.

To tenderize a roast, you can add a few extra hours since it will take awhile to heat through to the center of the roast. For a steak I'll go about 8 to 10 hours when tenderizing, but a roast could easily go 12 to 14. 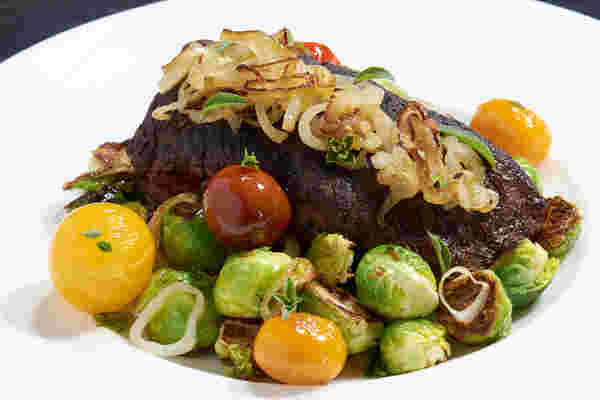 The sirloin is actually a large subprimal and is often divided into several different cuts, all of which have some of their own properties.

Top sirloin can be cut as a boneless roast or into boneless steaks. Certain cuts of top sirloin may include a small bone called the pin bone. Both are economical and yield a flavorful taste. They are considered to be one of the tastiest tender steaks.

The top sirloin is moderately tender. A top sirloin roast is versatile in that it can be cooked in almost any way. Top sirloin steaks are also versatile when it comes to cooking methods. They may me cooked as is, or marinated to produce a more tender steak or roast.

Top sirloin is a steak that is commonly found in a wide variety of restaurants and steakhouses. Since it is versatile when it comes to cooking methods, it is easy for casual family restaurants to prepare. Its combination of price and taste help make this steak a popular menu item.

Top sirloin is the cut of steak used in the popular Brazilian dish picanha. The top sirloin is skewered onto large metal skewers or swords and cooked over an open flame. This has become popular and many churrascarias (Brazilian steak houses) have now opened in the United States.

Often just sold as "sirloin", this part of the sirloin is tougher, larger and leaner, so is often cheaper. It can definitely benefit from longer sous vide cook times. The tri tip also comes from the bottom sirloin.

The bottom sirloin is found in the upper hip of the cow. The cut is considered perfect for roasting but some people even slice it for steaks. By marinating the slices, you can even produce flavorful and delicious steaks from the bottom sirloin cuts.

This cut can be broken down to tri-tip cut, flap steak, ball-tip roast and many more. Tri tip, in particular can produce dishes like roast, kebab and bistro steak. Although this cut is more chewy compared to top sirloin, you can enjoy it if you thinly slice it.

The flap section found in bottom sirloin as well as the flank section is often used for making hamburger or stew. The trick of making the best use of sirloin is by cooking it right. This cut is cheaper than top sirloin and more economical than cuts like short loins. In fact if you slice it well and cook it slowly then you can even use it for barbecue and fajitas. However, overcooking it would produce tough beef to chew.

It is very lean and tough, and actually comes from the "round" not the sirloin.

Sirloin in Other Countries

The word "sirloin" also can refer to the short loin section, especially in British, Australian and South African areas and the cut referred to as "sirloin" in America would be called the "rump". 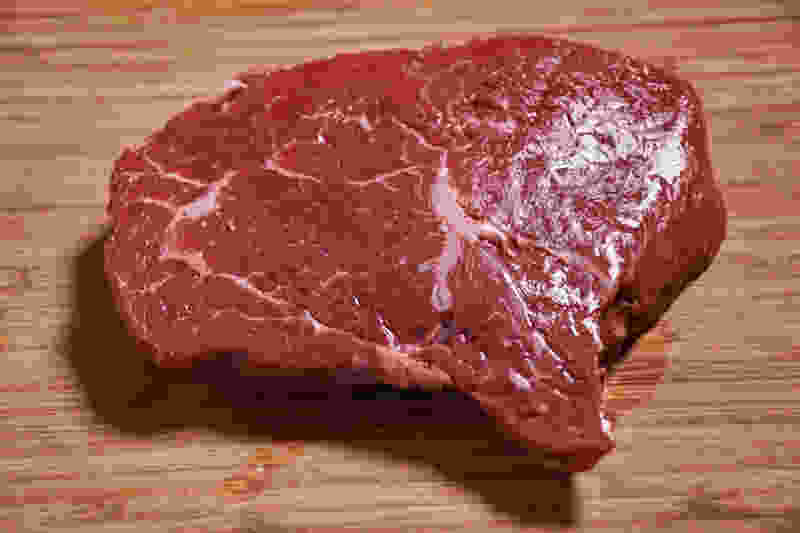 Sirloin steak is easy, tasty, and can be exceptionally tender and this recipe shows you how simple it can be. 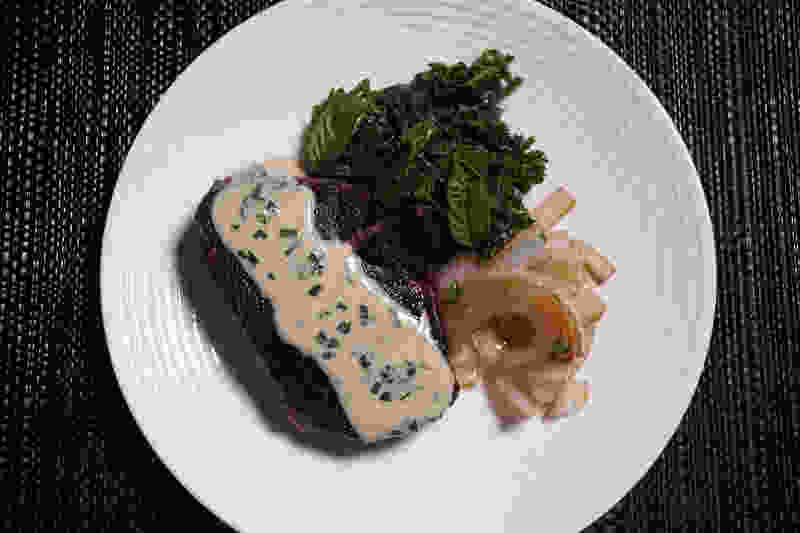 Preheat the water bath to 131°F (55°C) or your desired temperature.

Salt the sirloin steak and, if desired, rub with the spice rub. Place the steak in a sous vide bag then seal. Place the bag in the water bath and cook the sirloin for 2 to 4 hours, until heated through or up to 10 hours until tenderized.

Take the sous vide bag out of the water and remove the cooked sirloin steak. Dry the steak thoroughly using paper towels or a dish cloth. Lightly salt the sirloin then quickly sear it for 1 to 2 minutes per side, until just browned, then remove from the heat and serve.

When it comes to searing sirloin steak, I think it's more important than some other steaks. Sirloin is often leaner and less flavorful so the sear can add a lot of needed flavor.

You can use any of the best sous vide searing methods but my favorite is a pan sear or using the grill. I'll heat it up really hot and sear it for about 3 minutes while flipping every 30 seconds or so. 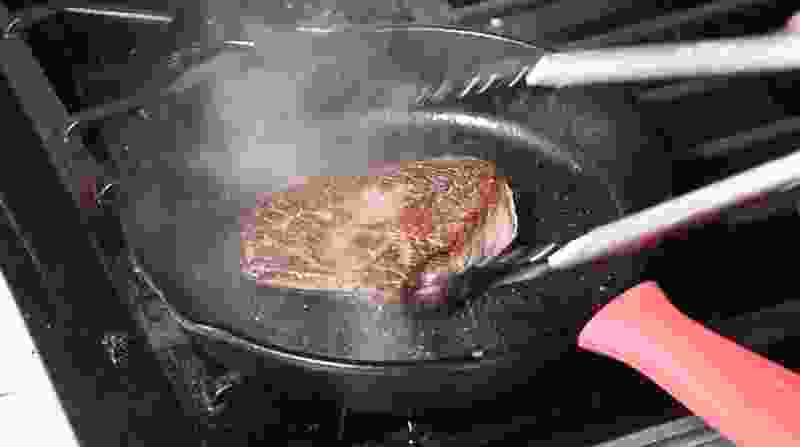 Between the short loin section and the round section lies the sirloin or hip section of a cow. There are many different muscles in this section which produce many kinds of different dishes.

When the bones are removed from this cut, three types of cuts are produced according to the name of its muscles: top sirloin, tenderloin and bottom sirloin. The top sirloin is part of the tender top loin muscle of the short loin. The tenderloin is the tenderest among the three; it is part of the short loin. On the other hand, bottom sirloin is the toughest one among the three and is the part of the sirloin tip muscle found in the round section.

Sirloin is an ideal cut of beef to cook sous vide. The steak becomes very tender while it remains moist during this cooking method.

Some of the sirloin muscles can be cut into flavorful roasts and those that are not suited for roasts and steaks can be used in stews and hamburgers. Compared to the short loin and rib section, sirloin is much cheaper. On the internet, many websites claim that sirloin got its name from King Henry VIII of England, who dubbed the sirloin steak as "Sir Loin". According to Snopes Fact Checking Site however, this rumor is completely false.

Sirloin is a lean dining option with which an individual can experiment with and expand his or her menu with items such as steaks, kabobs, sandwiches, roasts and many more. Many individuals prefer the sirloin for a steak. Do note that sirloin cuts used for steaks often have a bit of the bone attached to it. This adds more flavor in the steak.

Other Names for Sirloin Steak

Many different kinds of sirloin steak entrees and salads

What is the Best Sous Vide Sirloin Temperatures and Times?

Sirloin is one of my favorite "every day" steaks. It's mid-priced and decently tender with a beefy but milder flavor. The sirloin isn't as tender as many of the other steaks so I'll often sous vide it for 8 to 10 hours.

Do you have experience cooking sirloin? Let us know your thoughts in the comments below!

What Are Some Sous Vide Beef Sirloin Recipes?

Here are several of the Beef Sirloin recipes that I recommend trying out.

When I'm looking for a quick but flavorful meal, I'll often turn to a steak with tomatoes and wilted spinach. Any type of steak will do, but I really enjoy sous vide sirloin steak because it's flavorful, pretty tender, and not nearly as expensive as the higher ends cuts.

How Do You Reheat Sous Vided Food - Ask Jason

How do you reheat sous vide food? I have some sous vide time and temperature charts that talk about heating your food or pasteurizing your food; it all applies to tender foods. If you've cooked something ahead of time, it's now considered a tender food.

I was looking for a hearty, but easy, weekday meal so I decided to do a sous vide sirloin steak with roasted root vegetables. Sous vide sirloin steak is one of my favorite cuts to eat. It is on the leaner side but still has enough marbling to make it flavorful without being too fatty. It's also much less expensive than a New York strip or a rib steak, making it more accessible for a weekday meal.

One of my wife's favorite foods is quesadillas, luckily for me they are easy to make and can have a lot of variety. For sous vide quesadillas you simply cook the meat ahead of time then assemble the quesadillas when you are ready to eat.

One of the hard parts about summer cooking is keeping the food light. While I love pulled pork, big steaks, and juicy hamburgers I can only take so much heavy food. This sous vide beef salad with figs recipe is a nice alternative to some of the heavier meals while still giving me my beef fix.

Now that spring is finally coming around, it's time to start grilling. There's lots of ways to utilize sous vide with your grill but sometimes you just want a simple meal with some grill flavor. This sous vide recipe fits the bill.

One of my favorite meals is a good roasted beef. However, roasts are notoriously hard to cook properly. Even the best roasts have a wide band around them of overcooked meat but this recipe shows how sous vide can come to the rescue again.
|