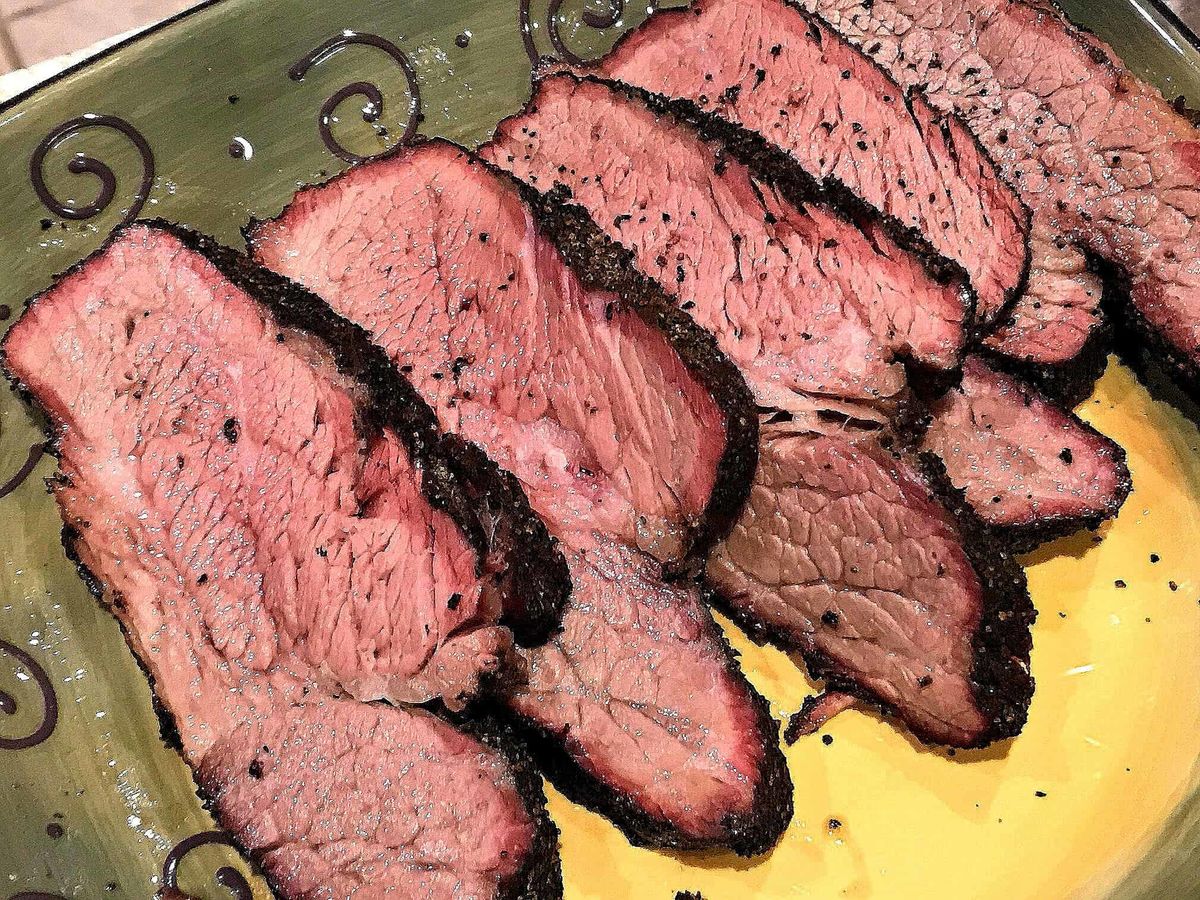 Traditional style, medium rare brisket in and of itself seems to be a contradiction.

We're so used to the traditional Texas style, low and slow, take it up to over 200°F, succulent but well done brisket that we all strive to master.  But there is an alternative to the traditional, you can call it a poor man's prime rib, and that can only be achieved via the sous-vide-que method. Thus a long period of time spent in the sous vide bath is the substitute for the low and slow smoking that is required to turn connective tissue and fat into a rendered and delicious piece of meat.

Can brisket actually be medium rare?

Sous vide brisket can! It's tender, juicy and a great take on a Texas BBQ classic!

1)    Fully trim all excess fat and silver skin from the brisket and apply the Kosher salt evenly to the meat surfaces. Allow the salt to dry brine for a minimum of 6 hours and preferably overnight.

2)    Pre-Smoke (optional). Pre-smoking traditional sous-vide style brisket that is intended for a traditional high heat finish is largely unnecessary. For a medium rare finish; however, it gives the polymerization of the outer surface of the meat a head start in becoming well established. It also allows that bark to take on some additional smokiness. Since lower temperatures are key to the medium rare finish, the final smoking will be limited, making this step essential.

3)    Fire Up. Prepare a grill for indirect cooking by placing 1/2 of a chimney full of pre-heated charcoal briquettes on one side of the grill's charcoal grate in order to create direct and indirect cooking zones. Adjust the grill vents to bring the temperature to about 275°F on the indirect side. Similar indirect steps can be used in a conventional smoker as well.

4)    Season the brisket with approximately half the seasoning

5)    Smoke the brisket in the grill or smoker away from the heat covered until the meat takes on a good amount of smoke and reaches an internal temperature of approximately 125°F as read by a good quality meat thermo device. Remove and allow to cool down for handling.

1)    Set-up your sous vide circulator and a vessel full of water large enough to hold the brisket. Pre-heat the water to 131°F.

2)    Place the brisket into either a vacuum seal bag (double bagging is preferred) or use the baggie displacement method of containment. Submerge the entire brisket in the circulating bath.

3)    Cooking times. As mentioned, traditional cooking of brisket benefits most by cooking with low heat over a long period of time to render down fat and connective tissue. Sous vide is the substitute for the time and temperature requirement. Depending on the grade of beef, times will vary at this temperature;

4)    At the end of the bath time, plunge the bagged brisket into a large container of ice water for about 30 minutes to quickly ramp down the internal temperature to stop the cooking process.

5)    De-bag the brisket and re-season with the reserved seasoning.

6)    Post-smoke. Set-up the grill or smoker as before. Re-establish the cooking temperature between 275-300°F. Smoke the meat as before to re-establish the bark and take on as much smoke as desired.

After resting, slice the brisket as you would a medium rare steak or prime rib roast against the grain. Serve as you would a traditional steak dinner with sides. Refrigerate the remainder and have great sandwiches the next day. Find new and innovative ways to cook large, tough cuts of beef like brisket, using a combination of traditional barbecue and sous vide low and slow methods.

5. After I smoke I will vacuum seal and put in fridge overnight again because I like to slice cold. Then add to a steamer or instant pot with a steamer basket and steam until at least 150-155°F but It's ok if it goes over a little.