London Broil technically isn't a cut of meat but a preparation method. Most meat labelled "London Broil" is actually chuck, round, or flank and you can follow the guidelines for those.

London Broil technically isn't a cut of meat but a preparation method. Most meat label "London Broil" is actually chuck, round, or flank. You generally will cook a London Broil to a steak-like texture, which generally takes 18 to 60 hours, depending on what the actual cut is.

If you want a more traditional pot roast-type meat you can increase the temperature. This is usually done at 185°F (85°C) for 8 to 18 hours for a very braise-like texture.

London broil is actually the name of a dish made of flank steak. Butchers mistakenly refer to the flank steak as London broil because this particular steak is used in the dish. Ironically the dish London broil doesn't originate from London and nobody can trace the origin of its name.

This large cut is taken from the flank region (abdominal muscles) of the cow; it is flat and thin with a distinctive longitudinal grain and oblong shape. It is flavorful in taste, however if cooked wrong then it is hard to chew, which is not good because flank steak is already pretty tough. The best way to cook this cut is to sous vide it. This easy cooking technique will give you a consistently tender and moist London broil every time.

Even when sous vided, London broil should be sliced thinly across the grain for added chewing tenderness. It can also be tenderized by using marinades and commercial tenderizers. The cut is ordered by weight, normally 1 to 2 pounds. When selecting flank steak, select the one that has bright red color and the least amount of silverskin.

Another advantage of this meat is the fact that it is an all-season cut. You can grill it in the summer or make roulade in winter.

This cut grew in popularity when it was discovered that great fajitas can be made from it. Flank steak is also popular in many other countries such as Mexico, Columbia and China. Many people confuse the flank steak with skirt steak. However skirt steak is fattier and more tender compared to the flank steak. 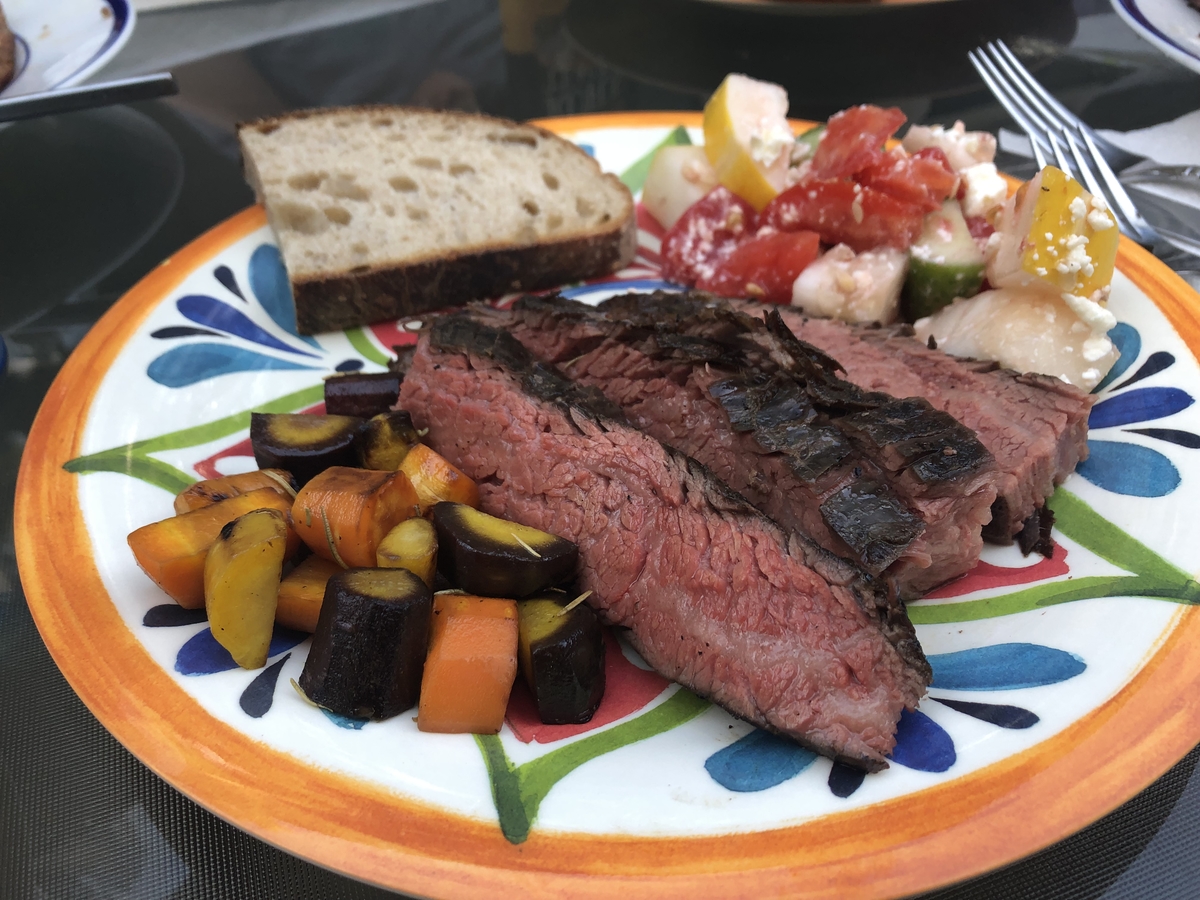 In my opinion, this is the best simple sous vide london broil recipe. London Broil technically isn't a cut of meat but a preparation method. Most meat labelled "London Broil" is actually chuck, round, or flank and you can follow the guidelines for those.

Preheat the Water Bath: Preheat a water bath to 131°F (55°C) or your desired temperature.

Season the Beef: Remove any gristle, fat, or connective tissue. Lightly salt the London broil and sprinkle with the spices.

Seal in a Bag: Place the London broil in a sous vide bag then seal the bag.

Cook the Meat: Place the sous vide bag in the water bath and cook until tenderized, 18 to 60 hours.

Dry the London Broil: Once the London broil is ready, remove it from the sous vide machine and take it out of the bag. Pat it dry with paper towels or a dish cloth so you can get a good sear on it.

Sear the Meat: Sear the London broil quickly to add a flavorful crust. Either a heavy pan over high heat, a grill turned to high, or a sous vide blow torch all work well.

Time to Plate: Plate the beef like you would a traditionally cooked version.

Other Names for London Broil

What is the Best Sous Vide London Broil Temperatures and Times?

London Broil technically isn't a cut of meat but a preparation method. Most meat labelled "London Broil" is actually chuck, round, or flank and you can follow the guidelines for those.

Do you have experience cooking london broil? Let us know your thoughts in the comments below!

What Are Some Sous Vide Beef London Broil Recipes?