Some people say that sous vide is boring. You just take your food, put it in a bag and it comes out perfectly cooked. But these people have never used a blowtorch to finish their sous vided food! I'm going to show you how to do it. 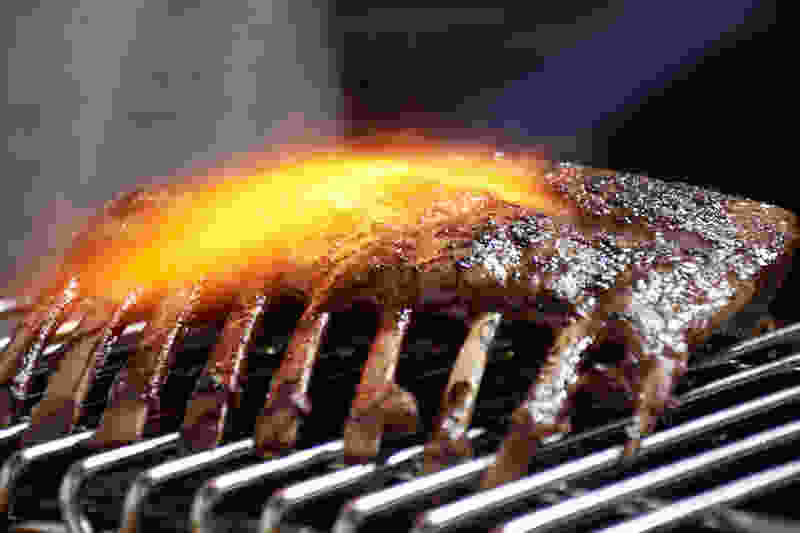 I want to talk about one of the most entertaining parts of sous vide cooking and that is searing your food using a torch.

Why Sear Food with a Torch

A lot of people think that using the torch is just showing off, and there's no actual benefit to it. But that's not true. There are a bunch of reasons why you would want to use a torch to finish off your sous vide food over regular sous vide searing methods. 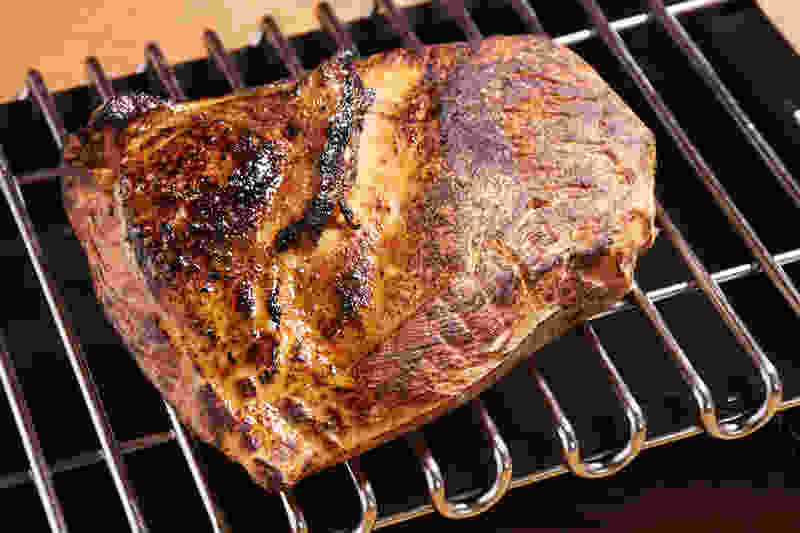 The first is that it is great for uneven food. If you've ever tried to sear a sous vide pork shoulder or get a crust on a sous vide chuck roast or even a sous vide beef tenderloin in a pan, it's really hard to rotate it, get it coated evenly. These things want to sit certain ways, and you can't get them seared evenly.

Using a torch allows you to get in all those nooks and crannies. I'll even use it for a lot of cuts that are easy to pan sear like a sous vide ribeye just to finish off the top. It makes the meat a lot more evenly brown and a lot prettier when it's going on the plate.

Make the Sear as Brown as You Want 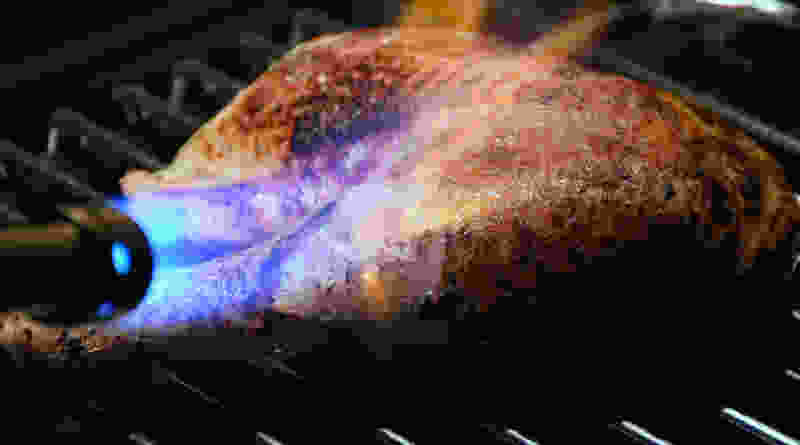 Another benefit is that you get the outside of your meat as brown and as beautiful as you want it to be. Because most torches don't raise the internal temperature of the sous vided meat nearly as much as a cast iron pan or a grill does.

This means you can take your time. You can really paint in the crust color you want, and it's going to turn out looking exactly how you want it cooked every time. 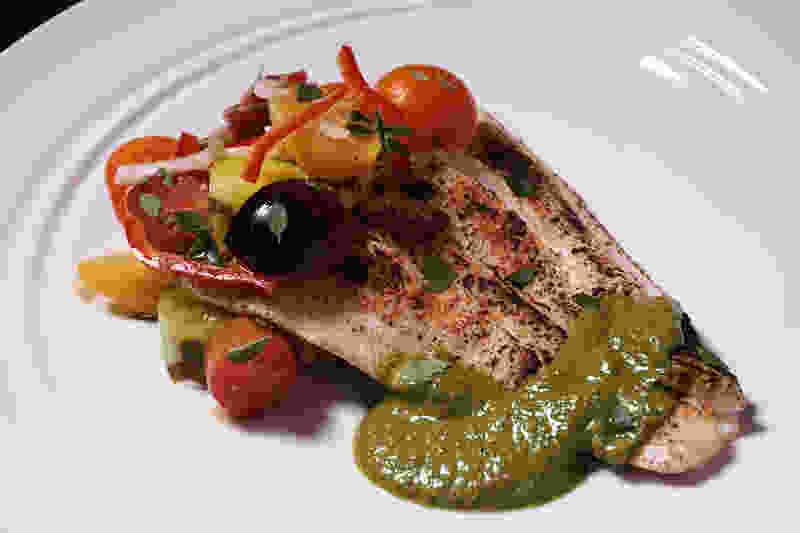 Since it doesn't heat the inside of the meat too much, it's also great for things like sous vide chicken and sous vide turkey. With these types of poultry you really don't want to sear the outside too much. If you pan sear a chicken for too long, it turns stringy and tough on the outside.

Using a torch allows you to get some nice color to make it look very presentable but you're not adding toughness to the meat at all. Which to me, is a really big benefit for both chicken and turkey.

It is something you can also do really well for sous vide fish. It's a lot harder to sear fish without it falling apart or raising the internal temperature since it is often on the thinner side.

Using a torch, you get a lot of great browning on the outside. It looks a lot more palatable and it's not going to fall apart on you.

You can even plate the fish first and then finish it off with a little bit of color using the torch when it's already on the dish. So you have no fear of the sous vide fish falling apart. 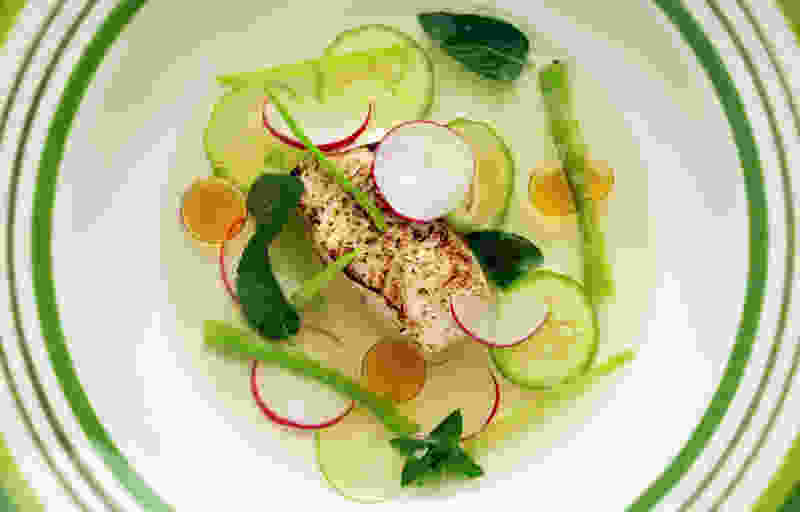 What is the Searing Process for a Torch?

When it comes to the process, it is very similar to the other searing methods.

Prepare the Food for Searing

First you take your food out of sous vide bag.

Next, you want to dry it off really well, using a paper towel or a dish cloth. 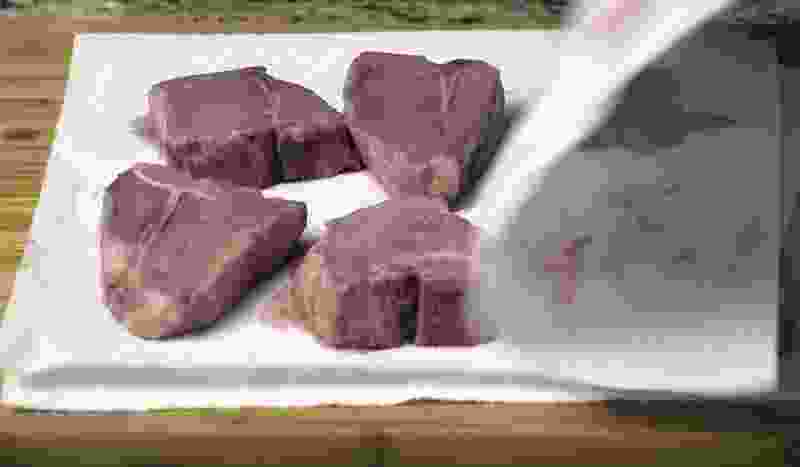 The drying off process isn't as important when using a torch as it is when you're using a cast iron pan or searing on the grill. This is because the torch doesn't raise the internal temperature as much as these other searing methods.

However, you will speed up the searing process a lot if you dry it off well and remove the moisture on the outside.

Once the meat has been dried off, then you go back and forth over the top of the meat using your torch.

Best practice is to start your torch when it's not facing the meat. And then to go back and forth over it about 2 to 4 inches away until it browns and looks really pleasant. 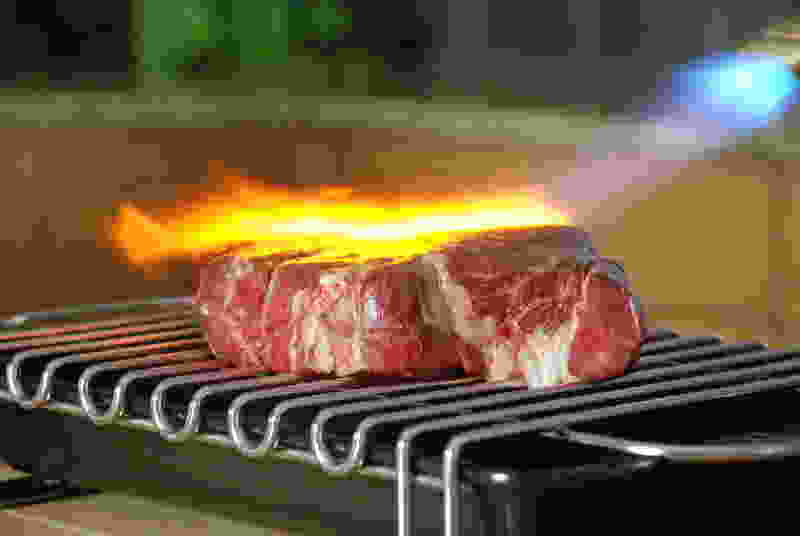 The 2 to 4 inch distance comes in because at the base of the flame of most torches, it's not as hot as a few inches out. 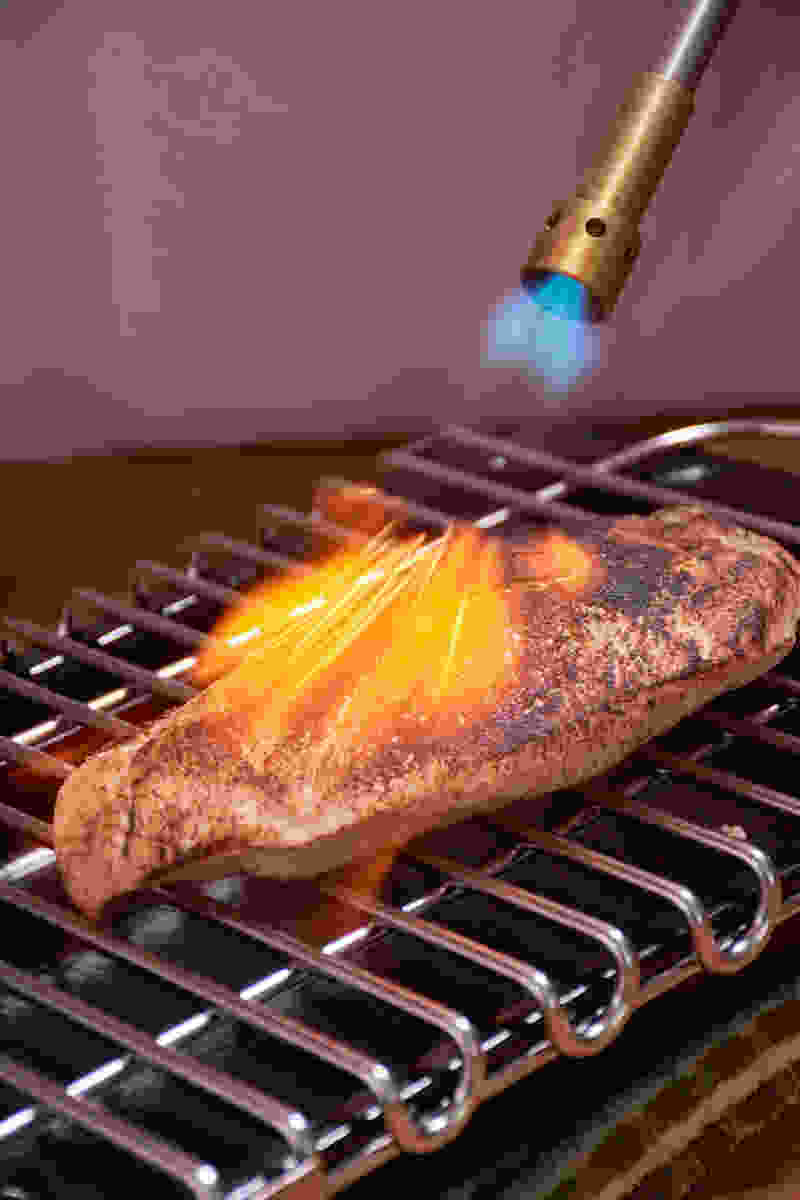 Also, there can be some unburned fuel there if you get the nozzle too close to the meat and you don't want that. So 2 to 4 inches is pretty ideal for maximizing your sear, but not getting any gas or any splash back on your food.

Because the internal temperature doesn't raise nearly as quickly as with other searing methods. You can take more time when you're using your torch to really make sure it gets colored in all the areas you want.

What is the Down Side to Searing with a Torch?

The biggest downside to a torch to me is that it doesn't have a deep penetrating sear. So while it looks really pretty and you get a little texture on the outside, torches aren't great for things like rendering fat on a rib eye or breaking down a fat cap on sous vide pork chops.

So it's something to keep in mind that if you do want this more rendered, cooked seared deep crust then some of the other methods can work better or in conjunction with a torch. 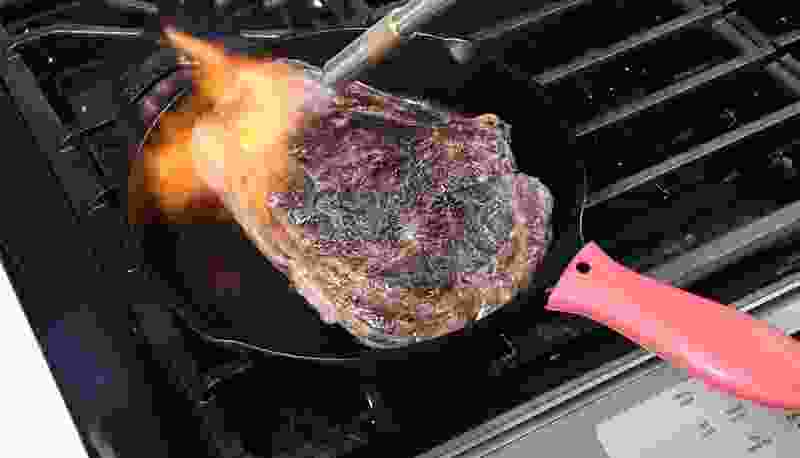 Often I sear things that are on the more delicate side like chicken, turkey and fish, just using a torch. For a lot of other things, I'll use a torch in conjunction with a pan sear or grill sear. This allows me to finish it off, really color in the crust so it looks great while getting the benefits of a pan sear or grill sear as well.

What Torch do You Recommend?

A lot of people want to know what's the best torch to sear your sous vide food with.

New torches come out all the time but the one I use is the Bernzomatic TS8000 for sous vide searing. To me this one is an ideal propane torch that it's easy to use. It's perfect to handle in my kitchen and it has a good amount of heat to it, which is something I want.

And you can read more about the reviews and my experiences using that. You can also get the Searzall attachment that goes on the end of it. This is something I don't use, but some people swear by using the Searzall and absolutely love it. 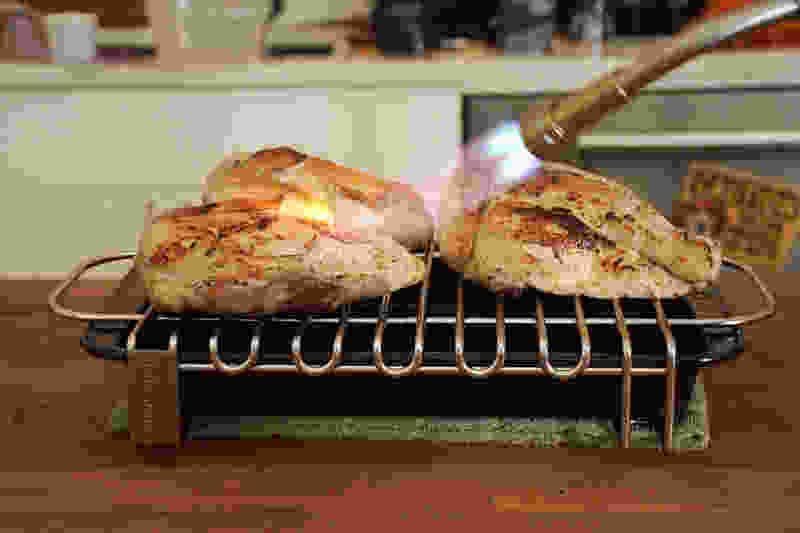 Iwatani makes a similar torch that many people use and very much enjoy. I also looked specifically into how Iwatani works with sous vide.

There are also a whole series of sous vide searing guns that have been coming out. You have the GrillGun, the Grill Blazer, and the Su-Vgun. These are fun, different toys to play with that also do a good job.

I haven't used many of those myself because I like my Bernzomatic TS8000 torch. However, I've heard from people I trust, like Darrin Wilson from Fire Water Cooking, and he really likes some of these grill guns that put out a little higher heat and work really well.

Some people also use what are called "weed" torches. Basically, you hook your propane tank up and you can burn down the weeds in your backyard.

Well, it's the same propane you would use in a Bernzomatic or any other sous vide torch, and you can use that to sear your food. Obviously, you probably won't be doing that in your kitchen, but if you have a nice outdoor area, it's a great way to quickly sear large quantities of food. 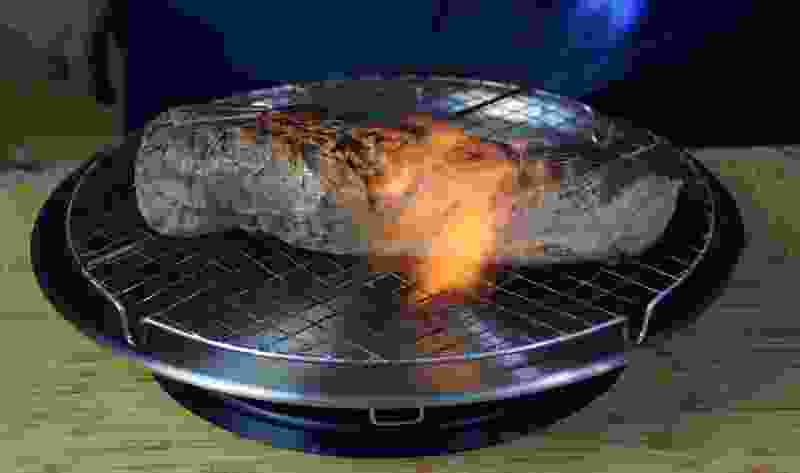 So now you know the best way to maximize your sear using a torch, when you might want to use it by itself, and when you want to use it in conjunction with other sous vide searing methods. And you have a few ideas for the best sous vide torches that are out there.