One of the rites of passage that most sous vide cooks have to go through, it's setting off every smoke alarm in their house. There's one reason why that happens to most sous viders. I'm going to tell you what it is. 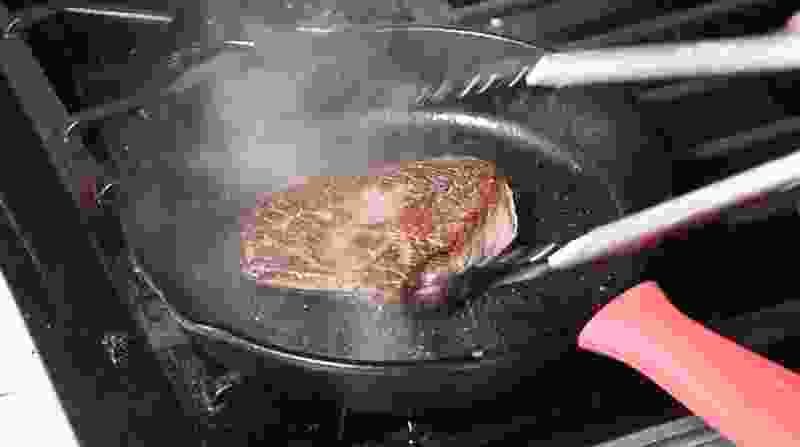 I want to talk about how to not set off every smoke alarm you have in your house. However, this is not foolproof. I live in a small New York apartment and I still occasionally set it off after sous viding for over a decade!

But this is something that's going to help you a lot - searing in an oil with a high smoke point.

What Oil Should You Use to Sear Sous Vided Food?

The general problem we run into occurs when the oil is heated at a certain point, it starts to break down and then it begins to smoke. And above that temperature, it smokes more and more and more.

Different oils have different smoke points. They can range from 450°F to almost 500°F, all the way down to like 150°F and 200°F. If you're using the wrong oil to sear, it can be really, really hard to sear anything without creating a ton of smoke and setting off your smoke alarms.

And it's not just visual and a pain in the butt, it's a sign of the oil breaking down which also can change the flavor of the oil. Some oils taste really bad when they go above their smoke point, so you can be adding some negative flavors to your food, which none of us want.

When it comes to what oil to actually sear with, there are a lot of different information out there. But in general, you can break it down into a few different categories.

Sous Vide Searing Oils that Heat to About 500°F

The first oils are those you can heat above 500°F. These are ideal for getting a perfect sear on your sous vide food. We want to have a short sear and as quick of a sear as possible. So getting that pan as hot as we can without creating a ton of smoke is critical to it.

The 2 common oils in this category are avocado oil and refined safflower oil. Those are both great oils that you can use for pretty much any searing process. 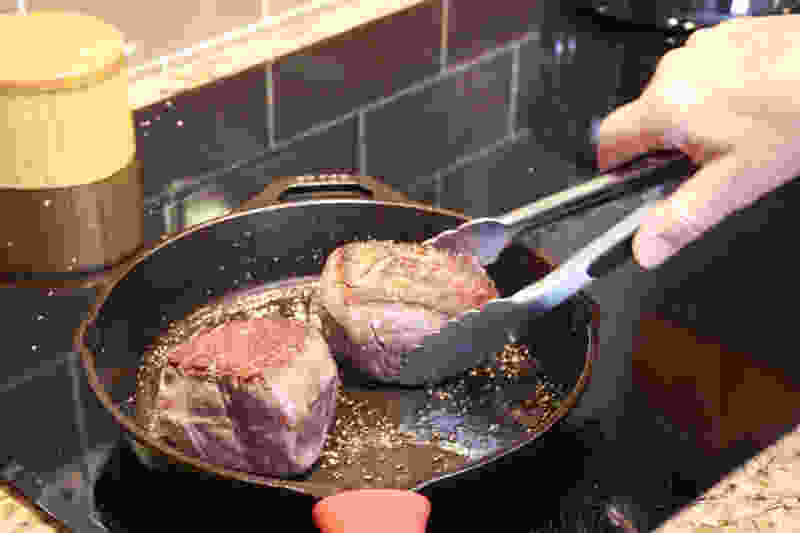 Sous Vide Searing Oils that Heat to About 450°F

There are a bunch of oils which can be heated to 450°F or above. They also work really well for sous vide searing. Oftentimes, they're cheaper than the other two oils, so you can turn to them.

These are some favorites that often people will mention they use all the time.

Other selections in this category are clarified butter or ghee, both of these can be really, really good and refined. Both peanut oil and sunflower oil are refined options that work very well. Corn oil fits nicely in this category and can also be heated above 450°F. 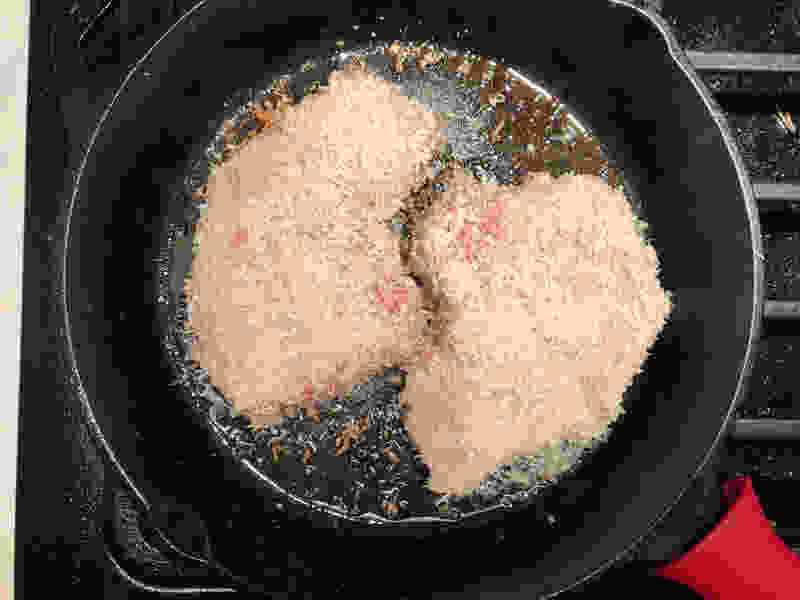 Sous Vide Searing Oils that Heat to About 400°F

There's a bunch of potential searing oils which can be heated to around 400°F. These will work just fine if they happen to be what you have on hand. But you will need to be much more careful so you don't set off the smoke alarms.

This section includes refined coconut oil, canola oil, grape seed oil, refined sesame oil and some other vegetable oils. These are the cut off that I would recommend for oils you can use during your sous vide searing process.

Sous Vide Searing Oils that Heat to About 300°F

If you can't get the temperature above 300°F or 350°F, you're really going to have trouble getting a sear on the outside without overcooking the inside of your sous vided food.

Reduce the Amount of Oil When Searing After Sous Vide 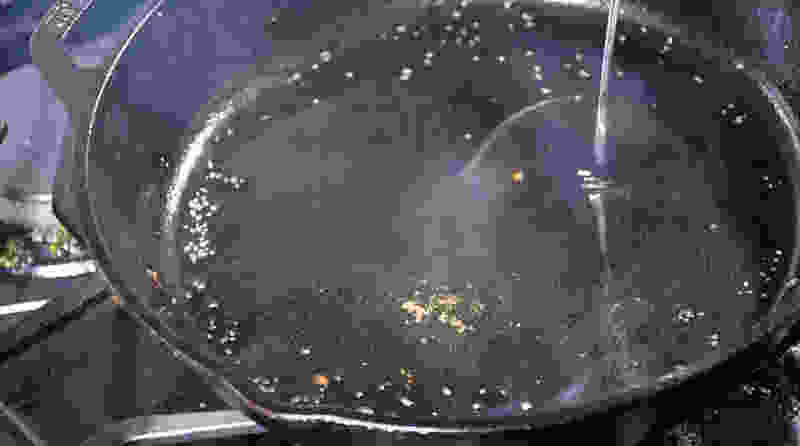 So you can just put a little bit in the pan, or you can put the oil directly onto the steak or the chicken itself, and then put it in the pan. This helps minimize the smoke.

Not only is there less oil in the pan, so there's less oil smoking, but the oil underneath the meat also stays cooler longer. So it's not going to go above that smoke creating temperature nearly as quickly.

Use the "Mayo Sear" for Sous Vided Food

And this is why some people really like to use a mayo sear. They put a thin layer of mayonnaise on the outside of the meat, and then they use that as the conduit for the heat when they put it in the pan. It's a good way to minimize the amount of oil you have.

Some people swear by using a mayo sear but I haven't experimented with it yet. Maybe that could be an upcoming video of me going through the Mayo Sear process. We'll have to see. 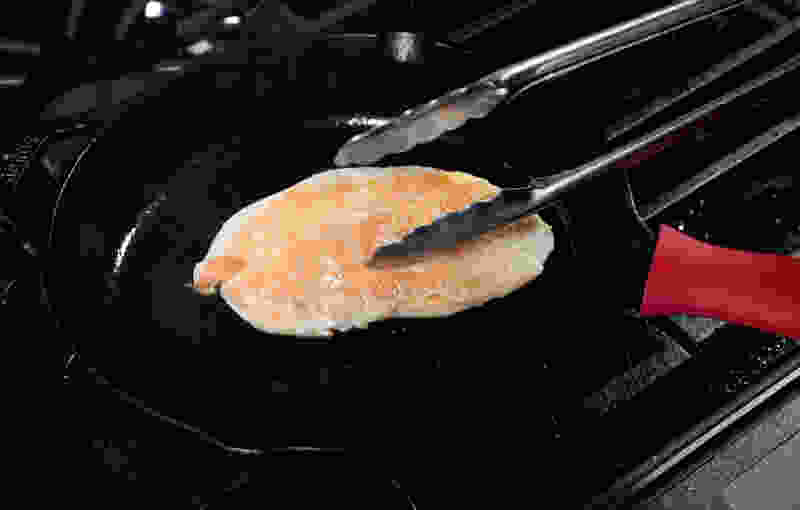 But for now, you know a lot of ways you can minimize the amount of smoke you're creating during the sous vide searing process. Which will allow you to get your pan hotter, get your sear better and minimize the internal overcooking of your meat which can occur from longer searing.

Best Oils to Use When Searing After Sous Vide

Refined avocado oil is made from avocados and has a very high smoke point, often above 500°F.

High-oleic safflower oil is made from a thistle-like plant related to a sunflower. This type of safflower oil has a very high smoke point, up to around 520°F.

Extra light olive oil is made by grinding olives into a paste-like substance, then the oil is pressed out. This refined olive oil has a high smoke point often above 450°F.

Ghee is a variation of clarified butter from cow's milk. When the butter is heated, the liquid and milk parts separate from the fat. This oil is called "ghee". It has a smoke point of well over 450°F.

Peanut oil is a mild flavored vegetable oil that is derived from peanuts. This slightly nutty oil has a high smoke point of above 450°F.

Sunflower oil is made by pressing sunflower seeds into a liquid. This cooking oil has a high smoke point of over 450°F.

Corn oil is made by pressing the corn kernels or seeds on the ears of corn. Its main use is in cooking, where its high smoke point of above 450°F makes it a valuable frying oil. Corn oil is less expensive than most other vegetable oils.

Refined coconut oil comes from pressing coconut meat that was heated then dried. It has a smoking point of above 400°F.

Canola oil is a vegetable oil made from crushed canola seeds. It can be used for searing sous vide foods since it has a smoking point of above 400°F.

Grapeseed oil is made from extracting from the grape seeds leftover during the winemaking process. It has a smoke point of just over 400°F.

Sesame oil is a vegetable oil made from pressing raw sesame seeds. It has a relatively high smoke point of just over 410°F.
Like this?
Have questions or comments about it?
Let me know in the article comments below or on Facebook!