I love pork loin and tenderloin and came up with this recipe using cocoa and cinnamon to coat and flavor it. Most people think spices like cocoa, cinnamon, and nutmeg can only be used in desserts but they are actually great in savory foods as well. You first season and sous vide the pork loin, then coat it in the cocoa and cinnamon before browning it. It gives it a really unique flavor with a nice mix of sweet, spicy, and bitter. 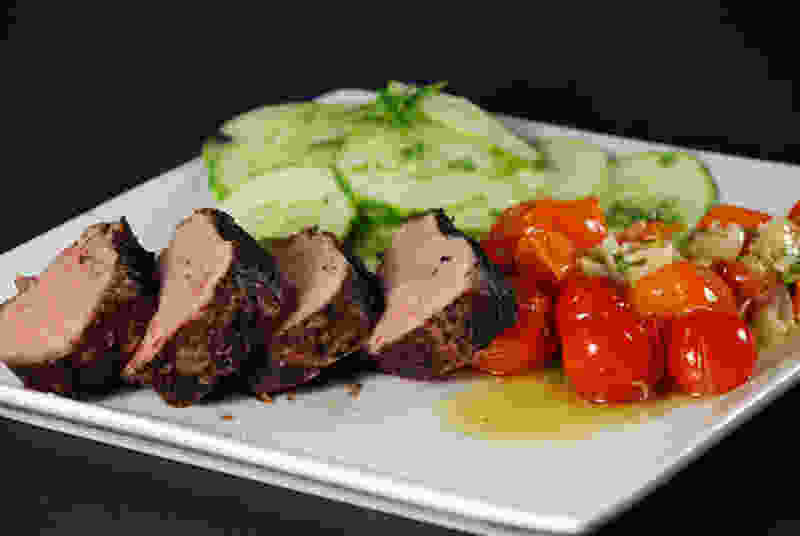 To start, I seasoned the pork loin with coriander, cinnamon, nutmeg and cloves then cooked it at 140°F (60°C) for several hours. Then I took the pork loin, patted it dry, and coated it with unsweetened cocoa, ground cinnamon, and chipotle chile powder. I grilled it with some olive oil to help with the browning until it had developed a nice crust. The resulting sous vide pork loin was incredibly moist and tender with a wonderful and unique taste that ran the gamut of flavors.

Pork, much like chicken, is good at many different temperatures and people usually feel strongly about which one it should be cooked at. I prefer mine cooked at 140°F (60°C), leaving the middle a rosy pink which is very moist and tender. However people enjoy it anywhere between 135°F to 149°F (57.8°C to 65°C). So find the temperature you like for pork and stick with it.

I decided to serve the cocoa rubbed sous vide pork loin with a very light cucumber salad and grilled cherry tomatoes. The cucumber salad is fast to put together and the key is a very fresh cucumber. You thinly slice the cucumber, then drizzle it with olive oil and a light vinegar (I used raspberry champagne but white wine vinegar works as well). Finish it with salt and pepper and some basil on top and you're all done. The crispness of the cucumber and the bite of the vinegar helped to complement the texture and flavor of the pork loin.

If you would like more information about the modernist techniques, ingredients, and equipment used in the cocoa rubbed sous vide pork loin recipe you can check out the following.

If you like this recipe you can get it and more than 85 other inspiring recipes to get you on your way to sous vide success. It's all in my best selling book Modernist Cooking Made Easy: Sous Vide - Get Your Copy Today! 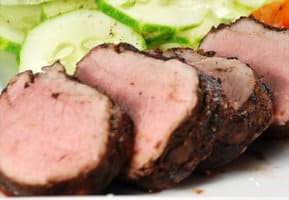 For the Pork Loin

For the Sous Vide Pork Loin

At least 4 to 12 hours before serving

Mix together the spices in a bowl. Lightly salt and pepper the pork loin roast and sprinkle with the spices. Place in the sous vide pouch and seal.

At this point you can store the pouch in the refrigerator for up to 2 days, freeze it for up to 6 months, or cook it right away.

Place the pouch in the water bath for 4 to 12 hours.

Note: Usually pork loin roasts are best when cooked for 4 to 8 hours but during the week you can get away with cooking them for up to 12 hours with just a minimal loss in moisture. 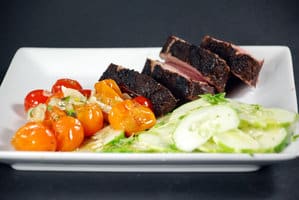 Preheat a grill to high heat or a pan to medium-high heat.

Combine the cocoa, cinnamon, and chile powder in a bowl.

Take the pork out of the pouches and pat dry. Lightly coat with cocoa spice mixture and drizzle with the oil to facilitate browning. Sear the pork until it begins to brown, about 1 to 2 minutes per side.

Remove from the heat, slice into serving portions, drizzle with more olive oil, and serve.

If you like this recipe you can get it and more than 85 other inspiring recipes to get you on your way to sous vide success. It's all in my best selling book Modernist Cooking Made Easy: Sous Vide - Get Your Copy Today!

Help me improve my content, let me know what you thought of this recipe! Just click on a star below to rate it.
Average Recipe Rating (click star to rate)
Thanks, your rating has been saved! Please let me know any additional thoughts in the comments!